A Hot Morning of Shooting

Although these Musings have been idle, life has not. Our son recently married, after a year of Wuhan Flu delays, and those preparations consumed more of our attention than I would have imagined, though that was given with much joy despite any stress. Over the last month or so, as the citizens of this country have gained "permission" to go about their lives once again as semi-free people, my "day job" has gotten busier. All that has meant more need for actual down time in my down time. And that, my friends, usually means good beer, bourbon, food, and cigars. Not laptop and blogging time. I did even manage to shoot an IDPA match a few weeks ago, and attend some cigar events, but never energized myself to put down any thoughts about those activities.
But this weekend featured a free Saturday, and the energy to join friends for a morning of shooting, once again at the Rivanna Rifle and Pistol Club monthly IDPA match near Charlottesville, VA. It was a hot, sunny morning, but that didn't deter a small group of shooters, and a dedicated match staff, from having a good time in the sun.
The first stage we shot had us standing nose to nose with the "gang banger." Knocking him over we then engaged a total of 5 targets Mozambique-style, two to the body and one to the head. It was a quick stage to get the juices, and sweat, flowing. It was also my best stage of the day, with zero points down. 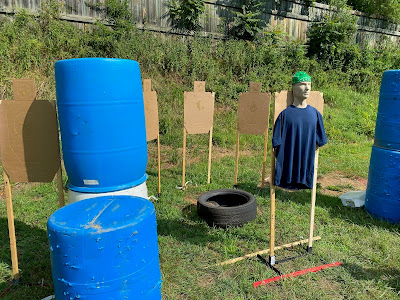 Next we moved on to a scenario that had a little more complexity to it. We began facing two "bandits" while holding a stack of money in our strong hand. Dropping the money, we engaged the two threats from retention; the gun in our strong hand, with our elbow held to our side.
Moving to a point of cover we engaged two falling poppers and two steel plates to be knock down. The last popper activated a double swinger on the other side of the barrier wall. Traversing to the next point of cover, we found an interesting array of four targets. There were two partial targets, an open sideways target, and a swinging target that had a non-threat also swinging behind it. Timing was critical so as to not hit the NTT as it swung in front of the moving target and behind the stationary one. I did complete the stage -2 points. 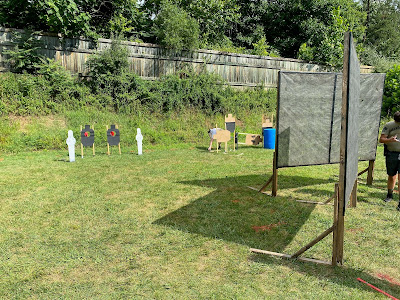 The third stage was a "standards" stage that gave pause, and created a lot of vacillating over the best way to shoot it. The set up was simple; three targets on either side of a barrier, to be shot in tactical priority. The stage brief directed that each target required three hits, and two targets had to be engaged strong hand only, two weak hand only, and two freestyle. It was the shooter's choice as to the order of shooting style. As I was shooting in the Compact Carry Pistol (CCP) division, I would be making two reloads. That required thought as to which hand my gun would be in when it went to slide lock. 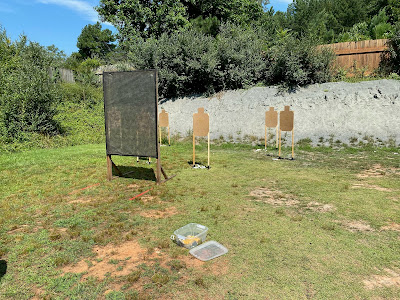 As I went through various options, it seemed I would need to ignore the desire to use WHO on  the closest targets. In fact, I would end up shooting either SHO or freestyle on the closest. That was fine, in theory, as I could engage them very quickly and be in a good position to complete the reloads. I ended up dropping a total of 10 points on the single hand shooting, and even one of the closest targets. I may have concentrated on what hand I should be using more than on the sights! This was one of those stages I would have enjoyed shooting multiple times to try different routines. 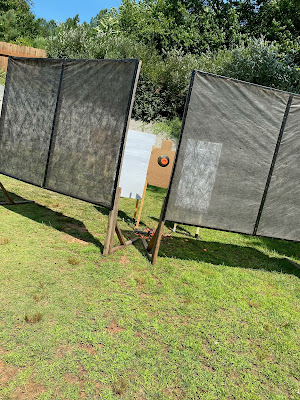 By the final stage, the sun was beating down in full force, and I struggled to keep the sweat out of my eyes. The start was facing up range with hands on head and gun holstered. We turned and shot a clay hanging in the center of a target. Once the clay was broken we move to either side of a barrier to engage four or three targets.
Between the squinting from sweat, being tired, and simply shooting too fast, my hits were a little scattered. I ended up -5 points on this run. Still, an improvement over the previous stage.
The match was over around noon and the air conditioned car was a welcome respite for the 90 minute drive home. It was a fun morning with friends, one that I hope to repeat soon.
Mused by David