Relaxing with Davidoff and Michter's

After that fun, but hot, morning of shooting, my Saturday evening involved a more relaxed, and cooler, activity. I had picked up a few "special" cigars a while back with which to celebrate our son's wedding. The schedule didn't work to enjoy a smoke the weekend of the wedding, so I brought one of them out the following weekend. Coincidently, I happened by an ABC store during the wedding travels, and picked up a bourbon I had been looking to grab for a while. So, by extension, this was a "wedding celebration." 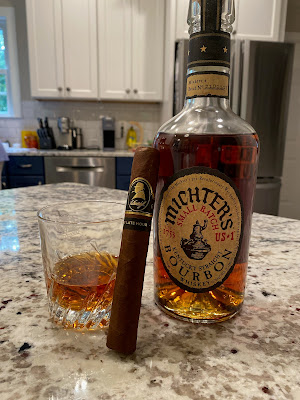 The Davidoff Winston Churchill Late Hour seems to be one of those quintessential "special occasion" cigars. A little pricey, but not extravagant, I've not smoked it before mainly because the expected flavor profile was less full or bold than where I typically gravitate. However, most descriptions call it full bodied.
The 6x50 Toro features an Ecuadorian Habano wrapper over a Mexican San Andres binder and fillers from the Dominican Republic and Nicaragua. Some of the tobacco used was aged in scotch whisky barrels for 6 months. The flavor profile is smooth, with notes of almond, milky coffee, and some cocoa. I'd consider it a medium to full bodied smoke. The flavors lingered without being overpowering. As expected, the burn was even and required no attention. 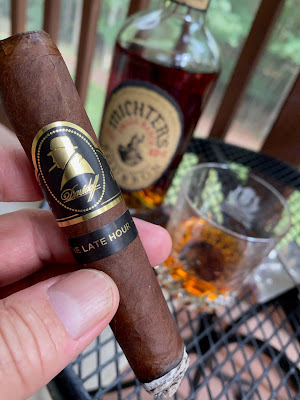 The bourbon in the pairing was also new to me, or at least not living in my recent memory. Michter's US*1 Small Batch Bourbon is said to be bottled from no more than 2 dozen barrels in a bottling run. At 91.4 proof (45.7% ABV) the bourbon is easy to sip, with an extremely smooth profile. There's a pleasing balance of caramel, vanilla, oak, with just a touch of pepper to keep it interesting.
I thought the flavors, and body, of both the cigar and the bourbon met in an ideal balance. Both were pleasing on their own, each greeted one another equally. I would not have wanted a more spicy cigar with the Michter's, nor a harsher whiskey with the Davidoff. Bottom line, I have more of both on hand, and will surely recreate the pairing soon.
Mused by David