The stars, planets, and my schedule, aligned this month and I was able to once again shoot the monthly IDPA match at Sanner's Lake in Lexington Park, MD. It was March 2020 when I last attended this fun match. I headed out before dawn to meet my travel companions on a pleasant, warm November morning with much anticipation.
The first stage had us starting at the center of a wall of barrels. Targets were engaged from cover at either end of the wall, followed by two targets found in the open on the way to another wall of barrels, at the last point of cover. I was -7 but this was still my best placing stage. 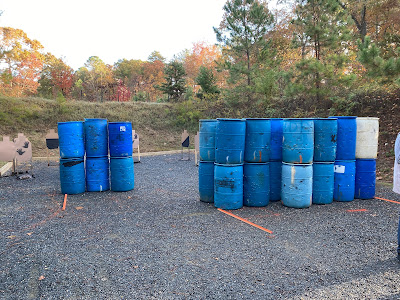 The match included the 5x5 IDPA Classifier, split into two stages, which our squad shot next. I hadn't shot the classifier for some time, so was happy to at least complete it. I didn't shoot it was well as I would have liked, but it's really moot since I received a match bump to EX a few years ago, and despite the effect of age on eyes and knees, I'm stuck with that ranking. (Unless I lose a limb I am told.)
After the two classifier stages, we moved on to a deceitfully unforgiving stage. Starting on the left side of the stage we engaged an open steel target that revealed a popup paper target. We then moved right along a barrier and engaged targets from cover as they were revealed. Appearing straight forward at the initial glance, the stage was deceptive in that many of the shots were restricted by barrels and non-threat targets. There were a fair number of hits on non-threats and high points down recorded. As I was shooting I saw a non-threat move as I hit it's stick, but at least did get the shoot through score on the intended target. 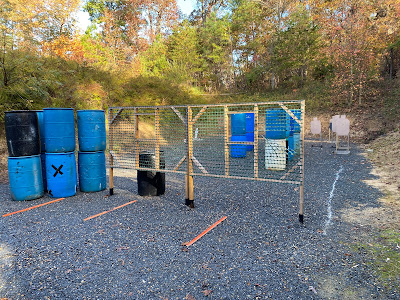 The last stage we shot was the most complex of the morning, with numerous shooting positions and targets hidden among the props. And as fate would have it, I was to be the first shooter. Starting with hands on the center barrel, the first two targets were found to the right. Moving left and slightly forward, several targets were visible. We then progressed down the center "hallway." 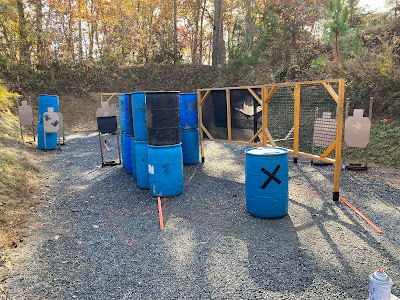 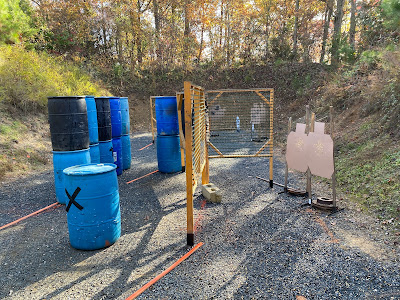 As we processed to the center of the stage more targets appeared to the left, and to the right, including a steel popper and a partially exposed head-only target. We were told the head target was initially planned to be a swinger activated by the steel, the prop wasn't working so it was changed to a static target during set up. Advancing further forward, we saw some open targets before moving to shoot the last target from a hard lean around the left side of the wall. I found all the targets and had almost all -0 hits. Turns out in my haste, I dropped one shot into the "hard cover" black on an early target for my only points down on the stage.
I enjoyed the match and seeing friends, despite the two hour drive time each way. I ended up 22nd of 51 Overall, and 7th of 17 in SSP. We finished shooting before noon, and our first stop on the way home was to do some whiskey shopping at the local liquor store. The free enterprise stores in Maryland often offer selections not available in our more socialist-themed State stores in Virginia. I found a couple fun bourbons to bring home. After a stop for lunch, the day was complete except for the drive home.