It's been four weeks since I shot the IDPA classifier, and I finally got back down to Black Creek this week to shoot another IDPA match. It was a small course of fire, just 38 rounds minimum, but still a lot of fun. I didn't shoot as well as I would have liked, but trigger time is trigger time, and due to my busy schedule I'll take a match when I can get one!

The first three strings made use of the same target array, shown below. On the first string the shooter started seated, facing up range. On the signal you turned and engaged two targets on one side, with 2 body and 1 head shot each, from behind the barricade, then moved to the opposite side to repeat. The next string required engaging the two strong hand side targets, with one head and one body shot, strong hand only. Then the string was repeated for the weak hand side, using only the weak hand. Good stuff there. 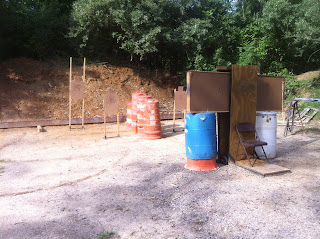 Black Creek likes to mix it up with some steel in the IDPA matches on occasion. Some purists get upset by this but I welcome the opportunity. This week the plate rack was set up with the six plates painted in three colors, and the plates had to be knocked over in the prescribed order. This was done three times; free style, strong hand only, weak hand only.

In the end I finished low, just 10th out of 12. However since all the shooters except one were ranked Sharpshooter or above, and I'm ranked at the low end of Sharpshooter, I placed about where I expected. And there are plenty of upcoming matches at which to work on my IDPA skills.

After I finished shooting there were no other shooters waiting at the time, so the range master asked if I wanted to shoot the stages again or shoot the plate rack for a while. I don't get the opportunity to practice on a plate rack outside of matches so I took him up on that. I loaded up a few mags and took 6 or 7 runs on the rack. It's pretty amazing how much easier it is when there's no clock running!

I spent more time driving to the range than I spent on the range, but it was still fun. On the way down I was passed by the Google Maps Street View car. I don't know if it was recording or not but I figure it didn't hurt to fix my hair and smile as it went by. 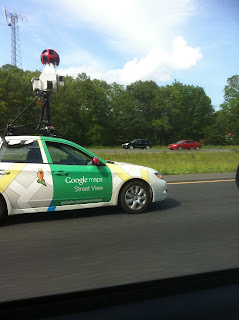