We hosted round two of our 2012 Beer & Food tasting extravaganza this weekend. Based on feedback from the first round, and availability of some menu items, we made just a few adjustments to the menu we presented in May. Colleen spent the days leading up to the event, planning and preparing the foods that were to be served with each course. Without a doubt, her cuisine is as big of a draw as the beer. Our son worked hard serving and clearing throughout the afternoon. For this gathering it was an all male guest list, and they each came with a big thirst and appetite. After a brief introduction to beer and food pairing, tasting procedures, glassware, and a prayer, we got down to the eating and drinking. I purposefully chose beers that are available year round, and brewed domestically. (Although one of the selected breweries is owned by a foreign company.) 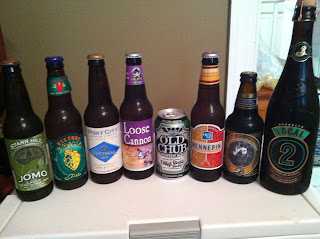 The first two pairings, Starr Hill Jomo Lager with Artichoke Dip and Tortilla Chips, and Victory Prima Pils with Cheddar Bacon Bites were meant to be "appetizers." These beers are craft versions of beer styles that many folks are familiar with. Next up was the Port City Optimal Wit and a Peaches and Cream French Toast Casserole. This combo made quite an impression and Colleen promised to share the recipe with the men's wives. Next up was an old favorite of mine, and one that I've not enjoyed in a while, Heavy Seas Loose Cannon IPA. I have to admit that when I was shopping for a hoppy beer to serve with the spicy Buffalo Chicken Sliders, I selected the beer for me. As expected, the beer was a hit with the other men as well.

Halfway through the list of beers now, we took a short breather to chat about other things. This gave Colleen a chance to catch up in the kitchen as well. We had a very enjoyable non-beer conversation about travel, guns, and society, before diving back in.

The next selection of Oskar Blues Old Chub with Spicy Beef and Provolone Semolina Panini was another hit that was followed by requests for the recipe. The slow cooked beef was a variation of this recipe, prepared with a Brown Ale. The Scottish Ale was an unfamiliar style to some of the participants, but one they'll seek out again. Next we changed gears a bit and served Ommegang Hennepin Saison with Olivada and Mozzarella on French Bread Crostini. One of my favorite pairings, the rich olive and garlic flavors of the olivada go exceedingly well with the spices of the Saison.

Finally we moved on to the "dessert" segment of the feast. Old Rasputin Russian Imperial Stout paired with a bowl of rich vanilla ice cream and a few chunks of Sea Salt Soirée Dark Chocolate. The rich roasted espresso flavor of the stout served to accentuate the flavors of the ice cream and chocolate. Lastly we brought out Brooklyn Local 2 with Stilton Blue Cheese, Sugared Walnuts, and Red Pear wedges. The mixed plated offered both matched (sweet fruit and walnuts) and contrasting (cheese) flavors. This course served as a light and refreshing ending to the meal.

After about a four hour exploration of beer, we finished over coffee and more conversation. It's always a lot of work to prepare for such and event, and there's no little bit of stress from wanting to entertain well and provide a tasty and enjoyable representation of craft beer. But once it's over, it all seems worth it. It's extremely fun and folks always enjoy themselves. I consider the afternoon a success if our guests leave with a new appreciation of beer and food. And since this done as a benefit for our son's school, it's even better.