The monthly Fredericksburg USPSA match took place this past weekend. The timing also coincided with record high temperatures, which brought the ferocious storms we saw Friday night. I started my weekend activity, ignoring the downed tree in my front yard, by helping to set up the match on Saturday morning. After a few hours our too small crew was on the verge of wilting. Personally, I forgot to bring a snack and had only water with me. We managed to get 8 stages set up in about 5 hours.

Sunday morning I returned for the match, again ignoring the downed tree in my front yard. As always, the Fredericksburg match is an all day event. Check-in was at 8:00AM, shooting started around 9:00AM, and we finished up just after 4:00PM. And it was a hot one! The temperature reached 99° on Sunday. This time I brought along copious amounts of water and "electrolyte replacement sports drink." I managed to stay hydrated and shot the match without suffering any serious heat-related issues. The crowd was smaller than usual, just 88 shooters in all. I suspect many folks chose not to shoot in the heat, or were still affected by the widespread power outages.

One thing that struck me about the stages from this match is that most of them offered numerous options for how one could shoot them. That's a testament to the Match Directors and the quality of their stage designs. One of my favorite stages was labeled "Curtain Call." Despite helping to set up, I didn't know all the final details of the courses of fire. For example, as part of this stage, we had set up two walls with ports that had targets behind them. Before the match started those ports were covered by window blinds. The shooter had to lift the blind to see the targets. Some shooters opted to throw the blinds over the top of the wall and then regrip the pistol with both hands to shoot. Others, myself included, opted to lift the blind with one hand then shoot the three targets behind each port strong hand only. It seems to have been a successful plan for me, as I had my highest finish on this stage; 14th out of 40.

Another fun stage was named "Port Holes." Almost all of the targets were engaged through openings in the walls. Some targets could only be seen when you were right up on the port, others could optionally be engaged from further away. The order, and from where, the targets were engaged gave the shooter many options and I saw a lot of different approaches to this stage.

One of the more "evil" stages, aptly named "Narrow Margin," included an array of steel poppers that had "no shoot" targets placed behind them. If you missed the steel, not only did you have to take another shot to knock over the steel, you also earned a penalty for hitting the no shoot.

As is typical, I finished in the middle of the pack; 21st out of 40 shooters in my division. I was pretty happy with that finish. I did shoot too many "Mikes" during the match, proving to myself once again, you need to get the points, it's not all about speed. Earlier in the week I was debating whether or not I even wanted to shoot the match due to the impending high temperatures. I am glad I did, despite the heat, as it was a lot of fun. Folks generally stayed in a good mood and accepted the extreme conditions as another part of the game.

After the match, we had a friend visiting for dinner. But before dinner, yep, you guessed it, we headed over the local range for some more shooting. This time there was no timer or running involved! Afterwards, a late dinner of baby back ribs from the grill capped off the evening. Needless to say I was pretty exhausted by the end of the day. Between the match construction project Saturday and lots of running and shooting on Sunday, I was tired, and more than a little achy! It was truly a full, and fun-filled weekend. 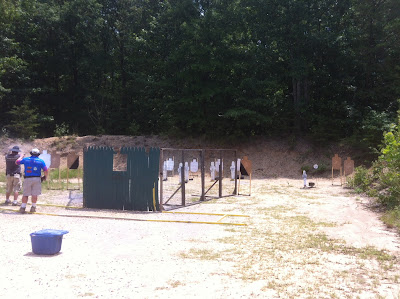