And Another! Ajax Aleworks

Yep, it's another new Virginia brewery! It's hard to keep up, but I'm certainly not complaining. Richmond BizSense brings the news of new brewery planned in the Richmond area.


Another pair of backyard brewers want to make a splash in Richmond’s craft beer market.

Coleman Stump and Josh Bennett are in the process of launching Ajax Aleworks, a craft microbrewery that will make 15 to 20 brews on a rotating, seasonal basis.

The two are in talks to lease a 1,300-square-foot space in Manchester, about five blocks from the Legend Brewery at the corner of 2nd and Decatur streets. Ajax plans to set up a four-barrel brewing system, enough to make eight kegs at a time.

Stump and Bennett say they have optimistic plans to launch by the end of the year. Ajax Aleworks will make its beer available only on draft, both to local bars and onsite at the brewery.

For  a long time it seemed as if I was regularly reporting on new breweries launching in southwest Virginia. The only discouraging part of that is finding time to visit those distant locations is hard to do. Recently it seems that the Richmond area is getting the attention of brewers looking to start on their dreams. The proximity of Richmond to my home is especially encouraging for planning visits.

Other new Richmond breweries previously covered here include Lickinghole Creek, Center of the Universe, Midnight and Hardywood Park. It's all just one more reason the Travel Channel named Virginia a top beer destination.

See "A brewery that could excite even Eeyore" for more information on Ajax Aleworks including the unique story behind the name and logo. 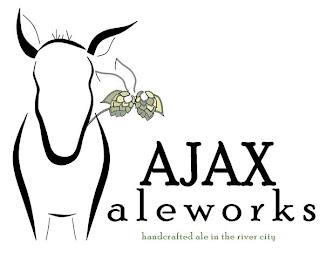