If you're getting déjà vu, fret not. Both the featured beer and cigar have indeed both been mentioned here previously, the former more than once. But some things truly are worth repeating.

As I headed over to 1781 Brewing for a relaxing Saturday afternoon, I saw that my return trip would likely be delayed by an overturned tractor-trailer on the other side of the road. Arriving at the brewery, I decided to pass the time with a large vitola cigar. I had started to pick out another Tatuaje Karloff. Then the proprietor, knowing me well, pointed out that she had another box of Tatuaje Avion 13 smokes in stock. The 6 ⅞ x 52 Double Perfecto would be perfect to kick off a long afternoon. 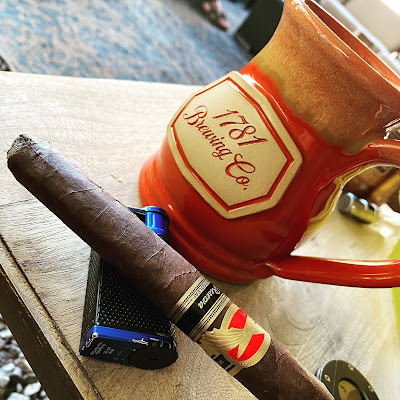 Tatuaje Avion 13 features a Connecticut Broadleaf wrapper encasing Nicaraguan binder and filler tobaccos. The Avion 13 wrapper differs from the other Avion vitolas, which have Ecuadoran Maduro wrappers. The robust, full body smoke has caramel and roasted coffee notes. It's a nearly two hour flawless smoke.
There normally wouldn't be much more to say about the 1781 Brewing Fimbulvinter with which I paired the cigar. It's a favorite of mine. You can read other reviews here and here, when the beer was paired with other cigars. However, this evening I was enjoying a variation the brewery offered called "Americano." The stout was brewed with the addition of a robust locally roasted coffee. This created an even richer coffee profile. The stout with the smoke made for an excellent combination.
After a few hours I heard that the road home had been cleared. But then I saw the food truck of the day, Cap'n Corbins Sea Food, had a table set up and they were shucking fresh oysters. That led to me grabbing a dozen on the half shell, another beer, and eventually another cigar. The afternoon soon turned to evening. When it was all said and done, it was an extremely enjoyable day, spent with good food, good beer, good cigars, and fine people.
Mused by David