I found time to spend an evening at the Olde Towne Tobacconist cigar lounge over at 1781 Brewing on Friday. I was taking a week off from work, and the lounge visit was just one of many activities planned for the break. It had been a month since I visited the brewery and there were new beers, and cigars, to be tried out. The weather in the evening was quite cool and breezy, but that was not going to be a problem as the wood stove was burning warmly and the large doors were open to the outdoor seating area which was now enclosed in a plastic barrier. It was quite cozy.
One of the new beers on tap was the 1781 Fimbulvinter. This semi-regularly released Imperial Stout is rich with notes of dark roast coffee, bitter chocolate, and molasses. It's a growler-worthy favorite of mine, and a great cigar beer.
I was pretty set on the cigar I wanted to try out this evening. I'd seen an announcement that the October 2020 release of the Tatuaje Monster Series Karloff had arrived at the shop earlier in the week. Interestingly, as I approached the shop's humidor, the proprietor remarked, "David, have you tried the Karloff?" 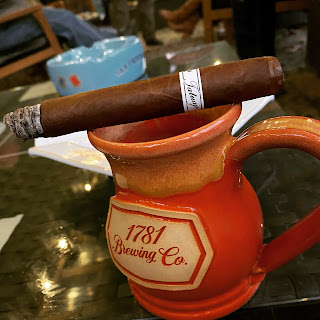 Each October, Tatuaje releases another cigar as part of its Monster Series. This year's version features a Ecuadorian Sumatra wrapper around Nicaraguan binder and filler. The 6 ⅝ x 49 stick has a closed foot. The cigar is full-bodied but still has a creamy, smooth, milk chocolate and nut flavor profile. It paired well with the stout and burned evenly the entire one hour smoke time. I'm honestly contemplating a box purchase.
I ended up staying at the lounge for several hours, enjoying great conversation, more beer offerings, and even a second cigar. It was a pleasant evening to kick off the beginning of a long-anticipated vacation.
Mused by David