A Rainy Afternoon, a Pumpkin Ale, and a Cigar

Several days of steady rain killed the idea of yard work or visits to enjoy the outdoors at a local brewery. Instead I passed time over the weekend relaxing on the porch, listening to the sounds of the rainfall, and enjoy cigars on the deck. For one such interlude, I grabbed long time favorite, the Rocky Patel Sun Grown Maduro and settled in to appreciate a lazy afternoon. 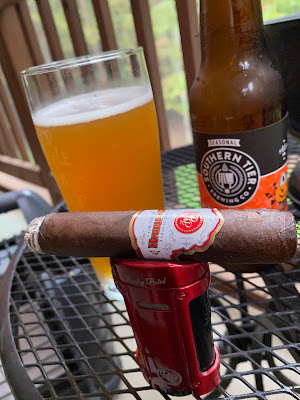 I opened a Southern Tier Pumking to go along with the smoke. It seemed like a fitting choice for the cool, rainy afternoon. This happens to be one of the few "pumpkin beers" I will bring home from the store each fall. Pumking pours a bright orange color with a thin head. The aroma of pumpkin pie and sweet malt is apparent immediately. The expected pumpkin pie spices are present, but the aroma of pumpkin flesh is there as well. The flavor is that of real pumpkin pie — the bready crust, the sweet pumpkin flavor, and just enough cinnamon, nutmeg and vanilla to complete the picture. The 8.6% ABV is well-masked but gives just a welcome hint of warmth in the finish.
One of my frequent laments about pumpkin beers is that the flavor becomes boring or blasé quickly. Despite my preference for this one over many others, near the end of of glass, I was getting tired of it. That's about par, I have consumed three bottles of the four-pack, and the fourth will likely sit for a while or be shared with a friend.
On the other hand, the Rocky Patel Sun Grown Maduro never fails to satisfy and I smoked it down to a hot nub.
Mused by David