I've been eyeing a couple large vitola cigars in my humidor, waiting for the time to enjoy them. With no trips planned, no major errands lined up, and (sadly) no shooting last weekend, the opportunity arose to spend some time with some of those more time consuming smokes.

I kicked off the weekend with a La Flor Dominicana TAA 2019 50th Anniversary Maduro. The cigar is a limited-edition release available only to retailers who are part of the Tobacconists' Association of America (TAA). I obtained it a couple months ago as part of a LFD sample from a local shop. This 6½ x 54 stick features an extreme rectangular box press shape. The dark Mexican San Andrés Maduro wrapper encases a Dominican binder and Dominican Criollo filler. The two large gold bands give the cigar a striking appearance. 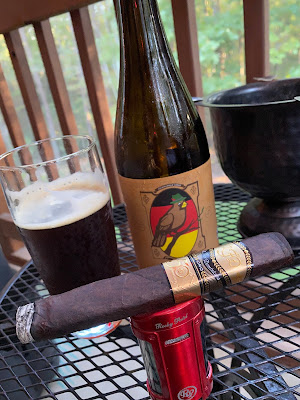 The beverage of choice this evening was Lickinghole Creek Craft Brewery German Chocolate Cake Lager. This flavorfully-named beer starts life as a traditional German-style Doppelbock. The classic German-style lager is then conditioned over cocoa nibs, toasted coconut, vanilla, and pecans. The aroma is dark chocolate, vanilla, and a hint of coconut. The base dopplebock is the predominate flavor with a mild caramel sweetness. The added cocoa and nuttiness that come through are a pleasing addition. The vanilla aspect is on the mild side. The 8% ABV is muted with little alcohol presence in the flavor.

When I first saw this bottle I assumed it was a stout, and was intrigued to read the label further to find otherwise. The LCCB variation of the style was done very well. Oft times augmented beers tend to come off cloying or candy-like, especially went comes to vanilla additions.

The 50th Anniversary Maduro was a medium-bodied smoke. The tightly packed stick gave off notes of cocoa, coffee, and earth. The flavor profile has a creamy, sweet aspect to it as well. The box-press presented some issues with the burn, requiring several touchups to keep it even, though that was not unexpected. The flavor profiles of the beer and the cigar were quite compatible and played well together. This large stick burned for a long two hours and 15 minutes. The bottle of beer I split with Colleen gave out well before that. Fortunately, the beer fridge offered many more options, all stories for later.