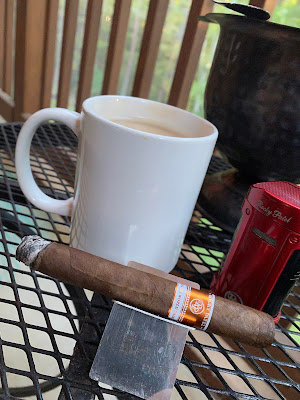 The blend features Mexican San Andrés Maduro wrapper over a Nicaraguan binder, with Honduran and Nicaraguan tobaccos as the fillers. The cigar has fairly strong notes of cocoa and espresso. A pepper and cedar spiciness lingers just under the dark chocolate notes, ever present but not overwhelming. The body is medium to full. The burn is even with copious smoke output.
The beverage pairing came from an instant Chai Latte pod I found in our pantry. Not sure where that box came from, but on a whim I decided to try it out. It was drinkable. The warm creamy beverage, with cinnamon, ginger and nutmeg flavors, among other spices, actually made for a tasty pairing with the cigar. It's quite a switch for this black coffee guy, but I'll admit to having enjoyed it. I might even try a fresh made one at the coffee shop sometime, if I can bring myself to say "Chai Latte" out loud. :-)
For those curious, my smoking time on the cigar was just under an hour. I understand the record for slow smoking this particular stick is somewhere around three and a half hours! That just seems like work to me. I'll smoke for enjoyment, thank you.
Mused by David