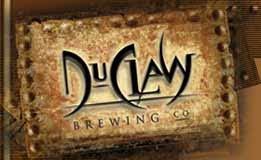 While we were in Baltimore visiting my parents, we left our son to be spoiled by his grandparents for a few hours so Colleen and I could check out the DuClaw Brewing Company restaurant in the Arundel Mills shopping center. DuClaw's has four locations in the Baltimore area. All serve their house beers which are brewed for all the restaurants at a central location. Arundel Mills is a big place but we found parking right near the restaurant. The eatery is located near an outside door so we didn't have to traverse through the mall. It was lunch time, on the Friday after Christmas, and though the restaurant was fairly busy but we had no wait for a table. The server was prompt to take our drink order, but we needed a few minutes to decide what we wanted since we had never visited before. Colleen ordered the Bad Moon Porter and I started with the Venom Pale Ale. We both decided on the Grilled Steak Sandwich, described as "Grilled flat iron steak sliced and topped with Boursin cheese and fried onion crisps. Served on a fresh baguette."

First a bit about the food. The beef was cooked medium rare per our request and was very tender. The Boursin cheese complimented it well. The sandwich was tasty, although the bread to meat proportion favored the bread too much for me. The crunchy fried onions had some spice to them and added some kick to the sandwich. Overall, the sandwiches provided a tasty lunch. But we're not here for the food, right?

Colleen was generous in allowing me more than a few sips of her Bad Moon Porter. This American Porter is dark brown with a moderate head. The rich and pleasant aroma is malty sweet with a hints of coffee and chocolate. The taste is lightly sweet, toasted malt with some roasted coffee. Bad Moon Porter has a very creamy, thick mouth feel. The aftertaste leaves you with expresso and faint hops. This is a very nice Porter.

My Venom Pale Ale was a clear copper-orange color with a thin head. The aroma was full of piney, floral hops. The flavor was crisp with a slight grapefruit citrus bite. There's a bit of pine and some malt in the background. After the swallow the flavor is dry and pleasantly bitter. This was an easy drinking beer and I had mostly finished mine when the food arrived. I could have easily had another but wanted to try another DuClaw offering.

With my meal I opted for the Black Jack Imperial Stout. I'd read good reviews of this Imperial Stout and was looking forward to trying it. I'm unsure if the recipe has changed or we got a bad batch, but I was disappointed with this beer. The stout was chocolate-brown in color with a very thin head. The light aroma was predominately malt with some dark chocolate. The flavor was dark chocolate with some roasted coffee, though the mouth feel was unexpectedly thin. The DuClaw web site list the ABV range as 7.5% – 8.5% but I really couldn't detect any alcohol in the taste. I wouldn't peg this as an Imperial Stout but perhaps an average American Stout. I found it thin and overwhelmed by both the food and the previous beers.

Of all three beers we tried the Bad Moon Porter went the best with the steak and cheese sandwiches and we both picked this as the best of the three. The Pale Ale was also very enjoyable. It handled the cheese flavor and the spicy fried onions very well. Overall, we had a good time. We enjoyed the food and two of the three beers were quite good. The non-smoking restaurant was a nice place to enjoy lunch and some good local beer.