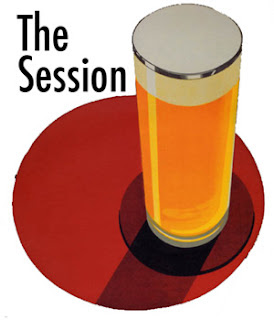 This month's Session is hosted by Ted Duchesne at the Barley Vine blog. The Session is an online project where bloggers "gather" to post on a single theme. The theme this month is Winter Seasonal Beers. Read more on this month's theme here. Ted will be posting a summary of all the Session posts shortly. Beer Haiku Daily has a history of The Session posted as well.

For this Session I chose to go with the "Saranac Twelve Beers of Winter" from The Matt Brewing Company in Utica, New York. This pack contains 6 different beers; Caramel Porter, Oatmeal Stout, Belgian Ale, Scotch Ale, Chocolate Amber, Winter Wassail. The name of this variety pack is a bit misleading since there actually 6 different beers. In past years I believe the Saranac Winter mix did include 12 different beers, so perhaps the marketing is just a carry over. I do think having two each of the beers to try makes more sense.

The first beer we tried was the Chocolate Amber Lager. Right off the bat the name seems to be a contradiction. Chocolate Amber? Anyway, this Munich Dunkel Lager pours a dark chocolate brown, no amber here, with a thick frothy cappuccino-like head. A thin head lasts till the very end. There is negligible aroma, only a slight roasted smell. The taste follows with a slight roasted malt flavor. There's very little hops. The taste is slightly sweet, but nothing that's really "chocolate". At 5.8% this is easy to drink but nothing exceptional. Good with some dark chocolate candy.

The Caramel Porter pours a weak cola-brown color with a thin head. The immediate impression from the aroma is that of sherry. Also a good bit of caramel on the nose. The flavor is caramel, coffee and very sweet. There's plenty of carbonation to tingle the tongue, perhaps a bit too much. This one seems a little thin for a porter. The sweet caramel flavor is different, though a bit sweet. The Caramel Porter checks in at 5.5% ABV. 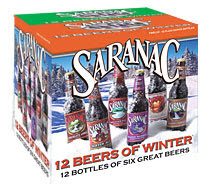 The Belgian Ale is Saranac's interpretation of a Belgian-style beer. It pours a redish-amber, almost copper color, with a 1/4 inch head that very rapidly drops off. There's lots of carbonation rising from bottom of glass that continues to the end. The aroma, while not strong, is of yeasty bread. The mouth feel is quite crisp with a spicy background. It's slightly bitter and medicinal. Not a bad beer, but not one I’d necessarily do back for. At 5.9% ABV the Belgian Ale is easy to enjoy.

The Winter Wassail is the beer we were most curious to try. The beer pours an attractive red amber color with a rapidly vanishing head, leaving some lacing on the glass. The aroma is spicy, mostly cinnamon, reminiscent of a "pumpkin ale." The mouth feel is sharp, with cinnamon and nutmeg spices. It finishes dry with a slight lingering bitterness. Spiced beers aren’t my favorites, but this one isn’t bad. It was a nice change after a string of uninspiring pumpkin beers this Fall. We enjoyed this 5% ABV beer with some Swedish Ginger Thins.

My first impression of the Scotch Ale was that of an average beer, but as I sipped and the beer warmed, this one grew on me. It pours a copper-brown with a very thin head. The malty aroma is faintly sweet. Slightly sweet malt flavor. There’s also a hint of smoke in the flavor. I enjoyed this one with some baked ham at dinner and the smoky ham flavor went well with the drink. This is is highest ABV of the six beers at 6% ABV.

And finally the Oatmeal Stout. This one pours a very dark black color with a thin, long lasting head. There's a simple aroma of roasted malt. The flavor begins with a light roasted malt. As the beer warms the sweetness of dark chocolate comes out. The stout finishes dry with some lingering bitterness. I found this to be a pretty good, not exceptional, oatmeal stout. At a mere 4.3% ABV this is the lowest of the group and it would be easy to have several.

I've had a few Saranac beers in the past and I was anxious to see how these special releases fared. The Saranac beers didn't disappoint. Overall these are decent beers, easy to drink and not given to the extreme flavors and high alcohol so popular these days. Several of the selections seemed to be a bit high in carbonation, but were all quite drinkable. My pick for the best of the bunch was surprisingly the Winter Wassail. This spiced English Ale was different than most of the beers I've been enjoying this season. Both the Scotch Ale and the Oatmeal Stout were enjoyable as well. Matt Brewing has put together a good group of beers that should appeal to a wide range of beer drinkers. I'll certainly look for the 2008 version of the Beers of Winter.

I enjoy trying brewers' mixed packs as it's an easy way to try a bunch of different beers from one brewer and this month's Session gave me an excuse to do just that. Thanks Ted.

Update: Ted has posted a roundup of Session #10 here.