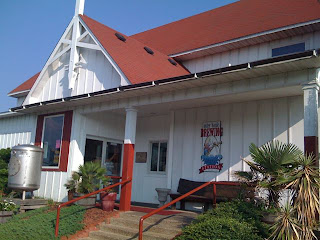 During our visit to the Outer Banks of North Carolina we enjoyed a steak dinner at the Outer Banks Brewing Station. The craft beer scene on the Outer Banks is pretty limited, so this local brewery was a must-stop. The white building that houses the brewery and restaurant is surprisingly easy to to miss; look for the large wind turbine located in the back of the brewery as your landmark.

Five house beers were listed on the menu; Ölsch (a Kölsch), Buddha Bubba Hefeweizen, Dragon's Milk Brown Ale, Captain's Porter and Third Degree Tripel. Unfortunately the Tripel was not available. No APA or IPAs, though they do serve Dogfish Head 60 Minute as a guest beer. Colleen ordered the Buddha Bubba Hefeweizen and I opted for the Captain's Porter. Shortly after we placed our order Colleen exclaimed "They put fruit in the beer!" when she saw a hefeweizen being delivered to a nearby table. Sure enough her beer arrived with a slice of lemon on the rim. It doesn't surprise me when I see this at most bars, but to see it right at the brewery is surprising. I would expect the brewer would want the flavor of the beer to be promoted. Fruit only serves to mask the flavor of the beer, which is why Corona and lime is such a common sight.

Colleen promptly removed the lemon slice from the tall wheat beer glass and found the hefeweizen to be very pleasant. The beer was quite cloudy with a mild aroma and a nice spice note. Looking around the restaurant it appeared the hefeweizen is very popular.

My Porter was served in a nonic pint glass. The beer was very dark with a thin beige head. The aroma was mild toffee with a hint of hop. The flavor was mildly sweet with some coffee notes. There was a mild hop bitterness that lingered for a short time. Overall a pleasing porter that went well with my food.

Our steaks were very well prepared and topped with copious amounts of herbed butter, with fried onion rings and green beans served on the side. Our son also enjoyed a steak with fries, though he had pink lemonade rather than an Outer Banks beer! The service was prompt and attentive. We enjoyed a nice dinner before heading back to the beach so our son could get in an evening swim.