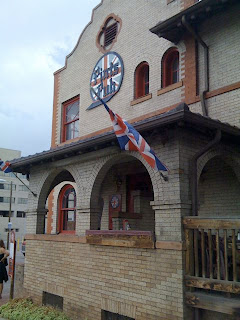 During my recent trip to Denver I joined a friend for beer and dinner at Pint's Pub. Pint's Pub is a "traditional British brew pub" that brews a couple of cask conditioned British ales. In addition to the cask ales, they offer a number of other house beers, along with an extensive selection of single malt whisky. I skipped the whisky and sampled the two "live ales".

My first selection was Dark Star Ale. When I placed my order the waitress asked if I realized the beer was a dry-hopped cask ale. Most assuredly I replied, that was the reason I was ordering it. The beer is served from a hand pump and at cellar temperature, around 50-55°. I am sure the question was to avoid complaints that the beer was "warm and flat." Dark Star Ale pours a deep brown with only a thin head. The carbonation is very light. The beer has a light, malty, molasses aroma. The taste is a slightly sweet toffee malt. The finish brings a "green" hop bitterness. Dark Star Ale is easy to drink and quite a pleasant beer. No ABV is listed but I suspect it's on the low range for an Engish Brown Ale, maybe 4.5 - 5% ABV.

Next I opted for the second house cask ale, Lancer India Pale Ale. Like the previous beer, it is served at cellar temp. The IPA pours a dark copper color with a moderate head that hangs on just slightly longer than that of the Dark Star. There's a slightly floral hop aroma. I found this to be a nicely balanced English IPA. Caramel malt starts the flavor profile, followed by a piney hop bitterness. The hop bitterness lingers a bit in the aftertaste. Again, no ABV listed but if not "sessionable", the IPA was likely also on the low end.

Both beers were quite enjoyable though if I had to pick one, I'd say the Lancer IPA was my favorite of the two. Deciding to call it an early evening I did not try any of the other, non-cask, house beers. Next time I plan to try others, including a Scottish ale, Gael Force Ale.

Pint's serves traditional English pub grub, including lamb, beef and chicken dishes. You can get a Ploughman's Platter, Fish and Chips or Bangers and Mash if you so desire. I opted for one of the Angus Burgers, or "Wimpys". I had my burger topped with Dill Havarti cheese. The burger was tasty and served with "fresh cut chips" and a selection of pickles, onions, and peppers as condiments.

I enjoyed my visit to this "English pub" very much. The decor is what I'd expect for an English pub, you can even pick up the London Times to read. One can look through a viewing window in the floor to the cask room below. The service was attentive and friendly, and the meal a good value. I'll add Pint's Pub to my list of must-visit places in Denver.