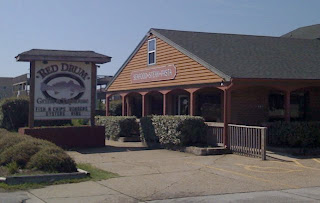 Somehow we've missed this establishment in previous visits to the Outer Banks, an oversight we won't repeat. The local tourism guides made note that the Red Drum Taphouse features 18 draft beers, in addition to bottled beer selections. That was enough to grab our interest. Many of those taps were devoted to the usual suspects, Guinness, Bass, Yuengling, and Blue Moon. But there were also less-than-usual offerings such as Lindeman's Framboise, Dogfish Head 90 Minute IPA, Victory Prima Pils, along with North Carolina's own Highland Gaelic Ale and Big Boss Bad Penny Brown Ale. That's a pretty outstanding selection for the Outer Banks.

I ordered a Dogfish Head 90 Minute IPA to sip on while we perused the extensive menu. Colleen opted for a Big Boss Bad Penny Brown Ale. The brown ale was a very nice English Brown Ale. Of course I enjoyed my IPA very much. However discretion weighed in to convince me one Double IPA was enough for an early dinner and I opted for a Highland Gaelic Ale to have with my meal. It is worth noting that our waitress was very familiar with the beers, something not often the case when ordering craft beer in a restaurant.

The menu offers a large selection of food including seafood, ribs, burgers and pasta. I ordered the Seafood Jambalaya, with sauteed shrimp and Andouille sausage in a Creole sauce over rice. Colleen ordered one of the daily specials, a pecan-encrusted wahoo. Our son decided on another special, a "low country boil" of spiced steamed shrimp, clams, Andouille sausage, corn on the cob and red pototos. All the food was excellently prepared and very, very tasty.

During the meal I noticed a Breckenridge Brewey sign hanging on the wall. I asked our waitress if they had Breckenridge beers. She smiled, and stated they did not, but shared that the owner had "spent some time in Colorado" and had collected breweriana for decorating the bar. "Like that Fat Tire sign" she joked. "I wish he'd take that down." Apparently folks get excited when they think they might find Fat Tire available in the Taphouse. The Colorado craft beer influence probably helps to explain the craft beer focus at the restaurant.

We were very glad to have opted for an early dinner. By the time we were finishing up around 6:30 PM, there was a line waiting outside of folks waiting to get in the door. The Red Drum Taphouse is located at milepost 10.5 on Beach Road in Nags Head. It seems that being off the main road isn't hurting business. While it might not qualify as a "beer destination", Red Drum Taphouse will certainly not disappoint the craft beer fan looking to enjoy some good beers and tasty food. I am sure we'll be back.