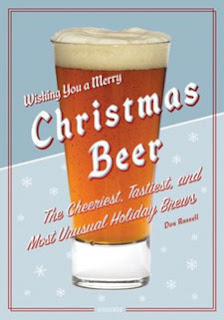 I make no secret of it, I'm not a Winter person. However, the onset of Winter does bring a treat; Winter Beers. These flavorful, and typically strong, beers are a bright spot in the dreary Virginia winter. Don Russel, AKA "Joe Sixpack", who blogs over at Beer Radar has compiled information on a bevy of Winter seasonal beers in a fun book entitled, Christmas Beer: The Cheeriest, Tastiest, and Most Unusual Holiday Brews.

What are "Christmas Beers"? The term doesn't refer to a particular style. These beers are typically spiced, and higher in alcohol content, with a "rich body and warming finish" according to the BJCP. Don Russell sums it up simply by stating "it is whatever the brewer says it is." While some brewers will label their Christmas beer as "holiday" or "winter warmer", it's all the same. As the author states, "... we all know the truth: not one of them would be on the shelf if it weren't for Christmas." No matter what they are called, these special releases embody the joy of the season and bring a smile to the lips of the drinker.

The book begins with chapters of historical notes concerning these seasonal ales and lagers. The author shares anecdotes from around the world. We learn how some of our favorite Christmas beers came to be. From Mesopotamia to Fritz Maytag, the author examines how beer has been an integral part of seasonal festivities. From trademark fights to marauding wassailers, to government attempts to protect Santa Claus, beer's association with Christmas has not been without controversy. The essays in the book are fun to read and filled with interesting facts and asides.

The bulk of the book is devoted to the beers themselves. In a section listing "The World's 50 Best Christmas Beers", Don goes into detail on his picks of the top Christmas beers. Included are tasting notes and other trivia, all enhanced by the author's humorous prose. I was glad to see some of my favorites make the top 50; Tröegs Mad Elf, Samichlaus Bier, Sierra Nevada Celebration, Great Divide Hibernation, Clipper City Winter Storm to name just a few. Another 100 beers are also listed with more brief write ups.

As icing on the cake, the book finishes up with a section of recipes for traditional Christmas drinks and foods prepared with Winter beers. Just reading the recipes has me thinking ahead about tasty treats for our own Christmas parties. The book ends with a brief guide to beer styles and proper serving.

"Christmas Beer" is an informative and entertaining read. It's obvious that the author enjoys these beers, and the Christmas season, very much. The book is a handy reference to enhance our enjoyment of Christmas beers and the fun times that come along with them. To borrow the opening line of the book, "Like most beer drinkers, I'm still a kid at heart. Drinking a good brew mainly is just fun — nothing more, nothing less." And there you have it. Cheers!