A Few Evenings in Denver 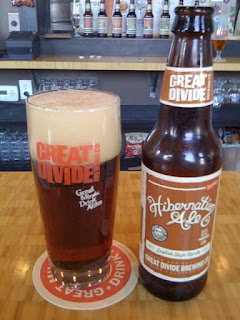 I spent a few days in Denver this week on business. As I usually do, I managed to work in some beer stops as well. On Monday evening, my first stop was the Great Divide Tap Room. There I enjoyed a Hercules Double IPA. Hercules is one of my favorite beers and since Great Divide is no longer available in Virginia, at least one stop at the Tap Room is a must anytime I'm in Denver. There's no food at the Tap Room so my visit was cut short by a need for food. I walked down to the Breckenridge Brewpub for dinner. There I opted the Breckenridge 471 ESB and a buffalo burger. I started playing football bingo and got sucked into Monday Night Football. I only managed to get through the first half since the time zone difference was catching up to me.

Tuesday evening started out with a quick dinner of Empanadas and a Great Divide Denver Pale Ale at Buenos Aires Pizza. One of my beer goals for this trip was to have Russian River Blind Pig and Pliny the Elder, both of which I've never had before. I strolled over to Falling Rock Tap House where I had been told both beers are on tap. Unfortunately the Blind Pig was out but they did have Pliny the Elder. I was very surprised by just how smooth the Pliny was. It was not as "extreme" as I had expected. There was no clue, in the taste anyway, that this is an 8% ABV beer.

On Wednesday, my last evening in Denver, I headed over to Great Divide once again. Even though the official release party wasn't until Friday evening, they did have this year's Fresh Hop Ale and Hibernation Ale available. (Thanks to The Full Pint for the heads up.) I enjoyed a bottle of Hibernation. This limited release beer has a mild toffee aroma with a hint of chocolate. The taste was mildly sweet malt with the hop bitterness coming through in the finish. I enjoyed it very much but there was time for only one. I did also have a sample of the Fresh Hop Ale. Since I had originally expected to miss the release of these two beers this was really a surprise treat.

After the short visit to Great Divide I caught the light rail to meet up with Josh Mishell of Flying Dog Brewery for dinner. Josh and I headed over to Great Northern in Denver's Tech Center. The beer list at Great Northern is pretty impressive, especially for a restaurant, and the food is excellent. I enjoyed another new-to-me beer, Deschutes Green Lakes Organic Amber Ale. The Amber Ale was smooth malt up front with a moderately bitter hop finish. We were joined by Neal Stewart, also from Flying Dog, and enjoyed a very pleasant evening talking about beer, Twitter, blogging, and many other topics.

I had a great time in Denver, as always. As luck would have it, I was there the week before the Great American Beer Festival. This timing of my trip to Denver is not unusual. Last year I ended up with a trip to Denver the week after the GABF. That's okay, there's always next year.

And now to rest for a day before heading to Durham, NC for the World Beer Festival.