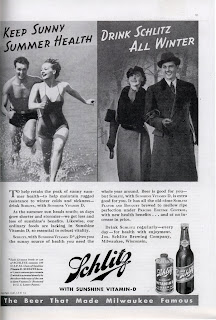 The father and son team over at Dr. Beer Love recently did a review of Pilsner Urquell and wrote about an alleged benefit of drinking "The Original Pilsner."

Because of it's water source, Pilsner Urquell has been used throughout Europe by many people to help dissolve kidney stones and gall stones. The water source comes from the nearby city of Marianske Lazne (visit their official web site), which is a spa town where people go to drink the local spring water for it's health benefits. Not just the plebians of the town, but world dignitaries, royalty from many countries and other famous people as well. The visits are actually doctor prescribed in many instances.

Pilsner Urquell has been produced since 1842, but classic American beers weren't lacking in the health claims arena. Note the claims in this 1930's ad for Schlitz Beer "with sunshine vitamin-D." The fine print in the ad states "Schlitz brewer's yeast contains pro-vitamin D which is activated directly by the ultra-violet rays of the sun to form Vitamin D." I'm assuming the beer had to be left out in the sun in order gain the health benefits. That's bad news of course since we also know that sunlight affects the hops in beer to give us skunked beer. I guess drinkers in the 30's had a tradeoff to make between health and taste. The Schlitz Brewing Company has recently brought back the classic 1960's formula for their beer. Alas, it doesn't appear to contain "sunshine vitamin-D."

Hat tip to Serious Eats for the Schlitz ad.