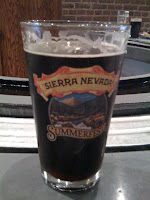 Chris and Rachel from Capital Ale House recently visited Sierra Nevada Brewing in Chico, CA to take part in a "beer camp." While there they helped to brew I.D.E.A. - India Dark Elusive Ale. This limited beer was tapped Tuesday evening at all Capital Ale House locations as part of the weekly "Steal the Glass" night. I went down to CAH with two good friends so we could try out this one-of-a-kind beer.

I.D.E.A. pours a dark brown with a thin beige head. The aroma is roasted malt with a hint of citrus. The taste is roasted malt with some sweetness to balance. A lingering bitterness remains in the dry finish. Overall, I enjoyed this beer, as did others. Admittedly, I was looking forward more citrus hop flavors based on the pre-release notes on the beer. Despite that, it was certainly a pleasure to be able to try out this very limited beer. In addition to I.D.E.A., I treated myself to a draft of Tröegs Nugget Nectar. I only managed to pick up a few bottles of this favorite this year, so I was pleased that Capital Ale House still had it on tap.

The next "Steal the Glass" night will be June 9 featuring Boulder Beer.