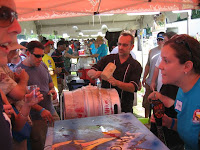 The Northern Virginia Summer BrewFest took place this weekend, June 27-29, in Leesburg, Virginia. I headed out to Leesburg Saturday morning to spend the afternoon at the festival. I arrived just as the gates were opening so I was able to make a tour around the grounds prior to the crowds arriving, to get a sense of what was available. My plan was to try out only beers that I had not had, or don't remember having, previously. The lone exception to that was Bill Madden's Wee Heavy that was the stealth beer being poured at the Vintage 50 tent. (It's just too good to pass up.) The Wee Heavy was my leadoff beer for the festival.

Next, I ran into "Dr. Joel" Armato from New Holland Brewing. Joel recommended that I try the New Holland Existential Ale. This big beer is a Barleywine or Double IPA, depending on who you ask. Plenty of citrus hops a big malt backbone. The alcohol level is noticeable, but really comes across as flavor, rather than a burn. Unfortunately Existential is not being bottled. I'll have to look for it on draft, or perhaps at the World Beer Festival - Richmond. The Existential might just qualify as my pick for my favorite beer of the festival.

Next up, Mountaineer Brewing Pale Ale, followed by 21st Amendment Brew Free! or Die IPA. The Mountaineer Pale Ale was a lightly hopped, drinkable ale. The 21st Amendment IPA was not as highly hopped as I had expected. Unfortunately, I also sensed a bit of sour, off-flavor in the sample, so I do want to try this again. (I understand the cans are now available locally.) I paired the IPA with a bowl of Chili Mac from Hard Time Café

I then moved on to a couple of very nice dark beers, the first being Williamsburg AleWerks Coffeehouse Stout. This a smooth, moderately light, stout with hints of roasted coffee and dark chocolate. I followed the stout with Sweetwater Chipotle Porter. The porter has a very enjoyable kick of pepper with a hint of smoke in the flavor.

As noted in a previous post, there were to be a number of fresh casks available at the festival. Unfortunately for my schedule, these weren't being tapped until later in the afternoon. I had to leave mid-afternoon for another engagement so I missed most of them. The first cask I saw tapped was Bell's Amber Ale. This was a pleasant, slightly sweet, red ale and refreshing in the midday sun.

After a break for some water and a rest in the shade, I headed over the the Allagash tent to see if their cask offering was available. It was not, so I opted for a glass of Allagash Four, and I wasn't disappointed. This dark brown Quadrupel gave off aromas of dark fruit and sweet malt. The flavor was more of the same, with a bit of citrus tartness in the finish. Certainly another high point of the festival.

I spied Bob Tupper over at the St. George Brewing tent and went over to say hello and have a taste of the new-again Tuppers' Hop Pocket Ale. There was a good sized crowd around the St. George tent as folks are very excited about the prospect of drinking the Tuppers' beers again. The beer being poured at the festival is from the initial, and only, batch of Hop Pocket Ale made at St. George so far. Bob and Ellie Tupper were joyfully getting feedback from folks on the new beer and there was a lot of "buzz" around the tent. I thought the Hop Pocket Ale was quite tasty and enjoyed the citrus and floral hop flavors and aromas. I'm very much looking forward to seeing this beer back on the store shelves. You can read the latest news about Tuppers' here.

Just as I was about to head out, I spotted Tom Cizauskas at the Clipper City tent hooking up their cask of Loose Cannon. I stopped to watch him work and hopefully get a chance to say hello. As soon as he finished that task, Tom was informed that the Flying Dog cask was not pouring properly. He grabbed his bag of tools and supplies and moved to the next tent. Quite quickly, the issue was solved and the beer flowed. Next, he was off to tap a fresh cask of Brooklyn Blast. I decided to delay my departure a bit as this was one of the beers I was looking forward to trying. Tom was a whirlwind of activity, and didn't slow down even as it was realized that a needed fitting was not on hand. No matter, out came the duct tape and someone proclaimed Tom "the McGyver of beer." In short order The Blast was flowing and I was treated to the first pour of this hoppy Double IPA. It was certainly worth the wait.

The festival wasn't only about the beers that that were being poured. There was plenty of news about things to come. Clipper City had 22 ounce bottles of their new Big DIPA on display. The first beer in the brewery's Heavy Seas Bomber Series will be appearing on shelves later this month. A new brewery with a display was Holy Brew Liquid Confession. They had six-packs of their two beers on hand, Heavenly Light and Purgatory Pilsner. However licensing details were not completed in time to allow sampling at the festival.

The weather on Saturday was perfect. It got very warm later in the afternoon, but still quite pleasant for enjoying friends and fine beer. The Northern Virginia Brewfest is well-organized with numerous regional breweries in attendance. The crowds are large but the festival is laid out with plenty of room for everyone. The next festival will be in the Fall. Make plans to attend the Northern Virginia Brewfest, October 24-25.

I've posted some pictures from the event here.