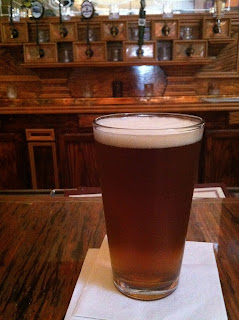 One beer style that I've long thought was missing from the lineup at Blue & Gray Brewery was India Pale Ale. Recently I heard from brewer Madison that he was working on an IPA and I've been waiting to see, and taste, what he would come up with. This week my wait was over. The brewery announced that the test batch of their first IPA was on tap at Lee's Retreat, and I was recently able stop by the brewpub for a pint.

The as yet unnamed beer pours dark amber with a moderate beige, and persistent, head. The aroma is citrus with a hint of fruit. The initial taste is citrusy hops with a touch of bitterness. Some caramel notes come through at the end. There's a pleasing bitterness in the finish. This is a well-balanced beer with enough bite to satisfy this hop fan. Centennial, Cascade, and Chinook hops are used in making this beer. I enjoyed it very much. My only regret was that I only had time for one glass during this visit.

You too can try out this new beer from Blue & Gray at the brewpub while the test batch lasts. I don't know how long that will be, so you probably don't want to delay. As for me, I intend to get back very soon to enjoy more.

Blue & Gray will be holding a "Name That Beer" contest to come up with a name for their new beer. It will be interesting to see what names the brewery's fans come up with. I predict this will be a very popular addition to the Blue & Gray lineup.

Update, today: Just heard from a friend on Facebook that the IPA is gone. I understand the next batch won't be brewed until May 31. Sad face.