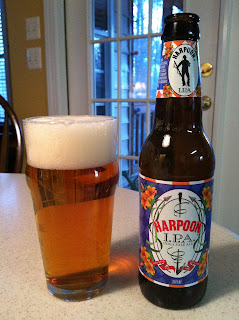 During my last trip to the grocery store, my usual beer choices were out of stock, much to my disappointment. Time to look around the aisle. I spotted Harpoon IPA, a beer that I've seen, but passed by, usually in deference to a Virginia beer. I'm familiar with the seasonal Harpoon Celtic Ale from this Boston brewery, so I decided to give their IPA a shot.

Harpoon IPA is lighter and more transparent than I would expect from an IPA. The thick white head is short lived. I found the aroma to be faint and somewhat floral, with a hint of fruit. The flavor is mild as well. It tends towards piney and grassy hops with a hint of sweetness coming through. There's a lingering, grassy, bitterness at the end. Overall this is a milder beer than I expect from an American IPA. It is easy to drink and doesn't overpower the taste buds. The ABV is also on the low end of the IPA range at 5.9%.

While not what I expected for an IPA, I found Harpoon IPA to be a refreshing beer. Despite being on the "mild" side, the flavors are crisp. In a blind taste I might not have pegged it as in IPA, perhaps a pale ale, or even a hoppy red ale. That's okay though, Harpoon's interpretation of the IPA style creates a beer that would probaby appeal to a wide range of beer drinkers.