How Dry We Weren't 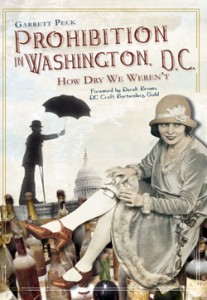 I recently finished a fascinating account of what Prohibition was really like in the U.S., especially in our Nation's capital. In Prohibition in Washington, D.C.: How Dry We Weren't, author Garret Peck brings the people and the times alive. This isn't a dry history book, Peck tells us the behind the scenes stories of how Prohibition came to be, how it was largely ignored across all social classes, and how those "thirteen awful years" ended.

Garrett Peck does an excellent job explaining the various forces that came together, at just the right time, to bring about Prohibition. While Prohibition movement was an obvious attack on the consumption of alcohol, the "dry" forces also used anti-German sentiment and U.S. patriotism, racism, anti-Catholicism, among other prejudices, to help push their cause.

Throughout the book, the reader is reminded how ineffective the laws were, especially in D.C. The social elite, and the poorest of the poor, all had easy access to alcohol, though not always of the best quality. It is estimated that bootleggers brought twenty-two thousand gallons of illegal booze into the city every week. And, though hardly surprising, those charged with making, and enforcing, the laws were often the biggest law-breakers.

Numerous photographs from the period help the author bring alive the people and places that earned Washington, D.C. the nickname the "Sodom of Suds." A reporter once described the city as being "so wet it squishes." Many of the names and buildings talked about in the book are familiar to us today, and indeed many of the buildings still stand. The book includes a "walking tour" of local speakeasies and private residences where alcohol freely flowed. This living history is described in an easy to read and engaging manner. I enjoyed Prohibition in Washington, D.C.: How Dry We Weren't very much and I suspect you will too. You can get it on Amazon.

Disclaimer for the bored bureaucrats at the FTC: A review copy of the book was given to me by the publisher. I was not compensated in any manner to express my thoughts on the book.