Last Saturday I drove up to York, PA to participate in the USPSA Mid-Atlantic Sectional match. This would be my third experience at a major match, and the first one I had to drive any distance to get to. To sum it up succinctly, this was a great match! York IWLA is a great venue with lots of bays, and a very pleasant place to shoot. Except for the malfunctioning chronos all the stages were well-run and quite efficient. But boy, was it hot! The wooded grounds were deceptive in that they didn't actually provide much shade, but the trees cut down the air flow, adding to the challenge.

The courses of fire were fun, interesting and challenging. Stage 3, the first stage our squad shot, required the shooter to start with an "IED" in their weak hand and deposit the device in a "bomb disposal barrel" before engaging the last target. Everyone on my squad chose to deposit the "bomb" before shooting any targets. I'd be interested to find out if any of the "expert" shooters opted to engage any of the targets strong-hand only. Stage 5, with both out & back and bear trap targets was intimidating to me. I've shot very few activated and dissappearing targets, and here we faced TWO that were activated at the same time! But, my hits on those targets were both two-alpha. In fact that was one of my best stages (26-A, 1-B, 1-C). Stage 6 had two popper-activated swingers that I found myself waiting for, using up valuable time. But, I did get my hits on those as well. Stage 7, the "house" course, AKA "Abbottabad Country Cub" was fun with 270 degrees of shooting. I'm glad I also had clear lenses for my shooting glassses to change into from the smoked ones, or not sure I could have seen the targets in the darkened "rooms". Stage 2, with just two poppers and a Texas Star was humbling, to say the least.

Overall, I was pleased with my performance. Unfortunately, I really bombed on two stages and that dragged me down overall, but that did not lessen what was great experience. My goal is to build consistency to reduce the chances of a bad stage dragging down my results. I felt my stage planning was pretty effective this time around, though I did have a couple of moments when I momentarily hesitated during execution. I found it interesting that all the Mikes (misses) I had were on stationary targets, not moving targets. That's a sympton of simply going too fast. Repeat after me, "Front sight. Squeeze."

This was a great match. The shooters on the squad were all very friendly and we had a good mix of skills. I look forward to returning to York in the future.

I posted a video here of some of the stages for your entertainment. 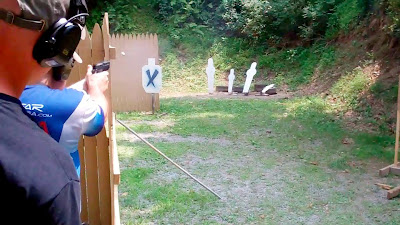