The Tasting Table posted an article about the free public tours at the Bowman Distillery. We've reported on the news tours previously so that's not news to us. The article goes on to mention some interesting small batch bourbons from the Fredericksburg distiller such as the John J. Bowman single-barrel ($50 for 750 ml) with toffee and almond notes, and the Abraham Bowman Limited Edition rye ($70 for 750 ml). But it was the last paragraph of the post that gave me a laugh.


After your tasting, stop at nearby Lee's Retreat BrewPub for lunch and a snifter of molasses-rich Minor Dementia Imperial Stout ($5.50), which ages in Bowman barrels.


I wonder how the Bowman folks feel about Lee's Retreat at the Blue & Gray Brewery getting a mention in the same article. After all, Bowman did post these signs on the the buildings they own near the brewery. 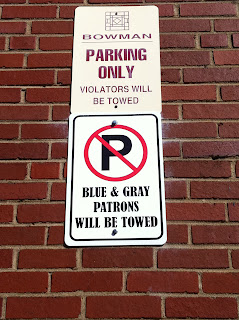 By the way, Lee's Retreat is closed until February 9th while they do some improvements.