Pre-Sandy Shooting, and The Curmudgeon

It's been a few weeks since I've gotten out to shoot, and I wanted to get in at least a little trigger time before next weekend's planned Steel Match. I feared with Hurricane Sandy bearing down on Virginia, the range trip didn't seem likely. However, by Sunday afternoon the rain still wasn't on us, though it was hitting folks not too far east of here. With the outdoor furniture secured, the chainsaw verified to be working, and the beer fridge stocked, there was still some time to get over to the range for a quick visit.

The steel targets were loaded into the car since they'd be quick to set up, and would be unaffected by any wind or rain. I managed to get about 50 rounds downrange before the club curmudgeon came up behind me clucking his tongue. "You ain't s'pposed to be shootin' steel targets" he opined. I informed him the rules allowed approved steel targets and the Range Master had in fact approved these, first earlier this Spring, and again when the new rules were posted last month and I reverified. In hindsight I should have asked him about the steel spinner I saw him plinking earlier with his 10/22, or about his lack of ear and eye protection when he approached my position as I was shooting. But frankly, I just wanted the old guy to move along so I could get back to shooting, there wasn't much daylight left.

I explained a bit about steel targets to him, which was met only by a blank stare, head shaking and frequent spitting of tobacco juice onto the ground. After a while he mumbled something about "it's your thing" and slunk away. I shot a couple of more mags, but my mood was fouled as I have an admittedly low tolerance for such irritating people. I decided to pack up and head home to enjoy a good beer, in peace, and await the so-called Frankenstorm.

I gotta find my own private range, some place I can shoot and avoid dealing with people! 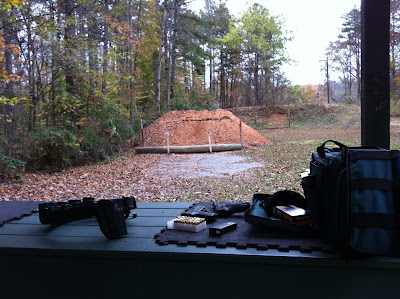