Trigger Time: When It Rains, It Pours 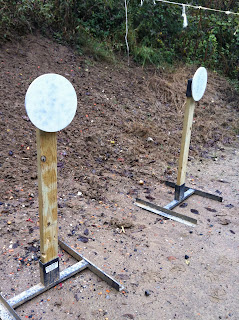 After a drought (not draught) of range time, I managed to squeeze in two trips to the range this week. Being optimistic for more trigger time, I left the car loaded with the target paraphernalia from the weekend trip, so I was prepared when a friend visited during the week and we made a quick after-work trip to turn some money into noise. It was a bit of rain falling so we set up the two steel targets. With three of us shooting, we sometimes had to ask, "Was that hit from me or you?"

It wasn't all play though. I spent a lot of time working on my initial push out and trigger prep. While I still want to perfect my technique more, I was comfortable enough to fairly consistently be able call a bad shot. Breaking the habit of listening for the ding of the steel is good progress. The second part of my practice was spent shooting both targets and working on transitioning between the targets. I tried to call the shots so that I could quickly follow up with a makeup shot before swinging to the next target.

But all work and no play makes Jack (and David) a dull boy. As I've noted previously, sometimes I find it fun to just shoot steel fast and enjoy the sounds of lead on steel. And with three of us shooting at the same time, we made some beautiful noise. Not a bad time for a rainy afternoon. :-)

And for those concerned, there was no draught to be had afterwards. However, a trip to the beer fridge resulted in clearing out a few bottles of Port City Optimal Wit, Hennepin Saison, and Tröegs Nugget Nectar. Do we know how to live or what?