I was told "religion and politics do not belong in craft beer." Apparently the folks at Huebert Brewing didn't get the message either. Their Nobama beer has proven very popular.


The Huebert's beer isn't available outside of the Oklahoma City area so I won't be adding it to my bottle collection.

I did pick up this bit of election year beer memorabilia at the World Beer Fest Durham in October 2008. 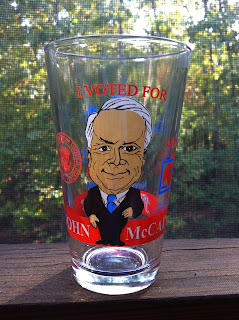