A Fire and A Stout 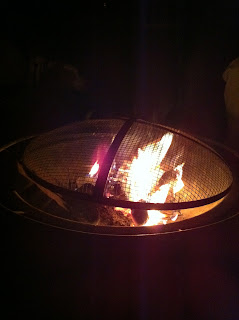 On a recent cool evening, one of the first of the season, we decided it was time to enjoy a peat fire. We had also spent a couple of hours before dusk out at the range so I had the urge to not only warm my outside by the fire, but my inside with a rich Imperial Stout.

While Colleen and a house guest were deciding on a beer, I went to the cellar and grabbed a bottle of North Coast Old Rasputin Russian Imperial Stout. It sounded like my two companions were leaning towards a brown ale, so I also brought up a Sierra Nevada Tumbler. This hoppy Brown Ale is a tasty beer, just not what I was looking for at this time.

I poured the two beers and offered both for tasting to the others. They both expressed delight with the brown ale so I figured that was settled. But then they each had a sip of my Old Rasputin. Big smiles ensued and I knew I was going to be bringing up more stout from the cellar. (Which reminds me, I think I poured the last three.)

I went ahead and enjoyed a few sips of the brown ale. It was as enjoyable as always, but just not what I was craving for this occasion, so it was left unfinished. Perhaps it was only fitting that the glass I pulled out for the last stout pour was a logo Sierra Nevada glass.

Both the burning peat and the Russian Imperial Stout were a fitting finish to the day.