I was perusing Facebook earlier today and I saw that Park Lane Tavern has listed an exciting "Steel the Glass" selection for this evening. Blue & Gray Temporary Insanity Stout was to be the featured beer. As soon as I saw their announcement I began making plans to get over there after work.

Fortunately I checked back later and saw that they had deleted that post and announced a different selection for the evening; Heiniken & Newcastle. Well, that's disappointing. Neither of those will tempt me to visit. I think I'll visit my refrigerator instead.

What also caught my eye in the Park Lane Facebook post was the photo they had found to use in their original promotion. Look familiar? 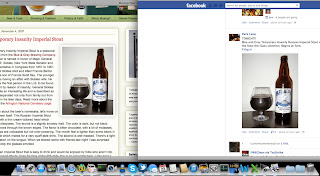 Seriously, I am glad they found the picture and am happy they wanted to use it. (Though attribution is considered polite.) My dismay is that they cancelled a tempting craft beer selection, for something this is, well, less than tempting.