A Weekend In New Orleans

I spent last weekend in New Orleans for business meetings. Fortunately I was able to get out of the hotel on occasion and take in some of the local flavors. I was, obviously, interested in local beers and was able to try quite a few different ones during the trip.

My first order of business after checking into the hotel was to find lunch. I walked into the French Quarter and stepped into one of the first places I came to that had an open table. Soon I was enjoying a spicy bowl of shrimp and sausage gumbo, along with an Abita Amber. Abita Brewing may be the most well-known Louisiana Brewery, and we can even get some of their beers in Virginia. If you can get it in your area, Abita Amber is an very nice lager, and one that seems ubiquitous in most New Orleans bars. The Amber, and later the Abita Turbo Dog English Brown Ale were the only two beers I had that were not new to me. They were also the first two beers I had during the trip, so the rest of the visit was to be new territory. 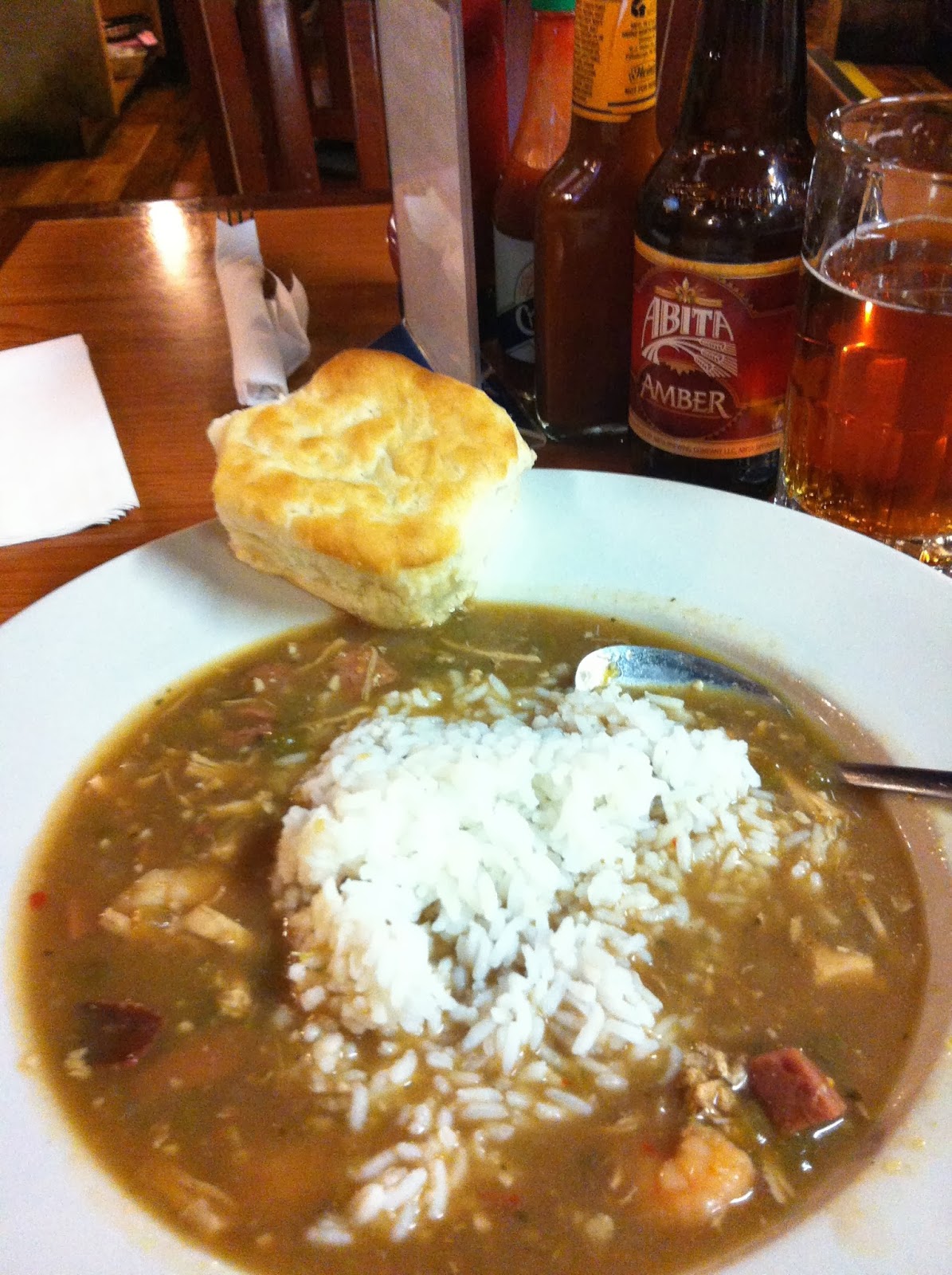 Another Abita beer enjoyed during the weekend was their seasonal Christmas Ale. On a restaurant menu I saw Abita "seasonal" listed and upon inquiry was told it was Christmas Ale, and the bar had just one bottle left. Described as a "dark ale," it reminded me of a milder Sierra Nevada Celebration. Caramel brown in color, there were piney, resinous hops with just a hint of spice, which I enjoyed very much. Restoration Pale Ale by Abita was the final beer from this brewery I tried out during the weekend. This was a nice citrusy pale ale that made a fine accompaniment to some spicy fish tacos at lunch.

During an evening walk through the French Quarter with co-workers, I spied the sign for Crescent City Brewhouse. I saw the brewery equipment inside, and I peeled off from the group without a word. (This group seemed more interested in walking around than drinking or eating.) I was quickly joined by the other craft beer fan in the group. The menu listed six beers, 4 named and 1 special seasonal, so we each ordered a flight of samples. I was quite pleased when the bartender set out six beers in front of me saying, "We have two seasonals on." Good timing! 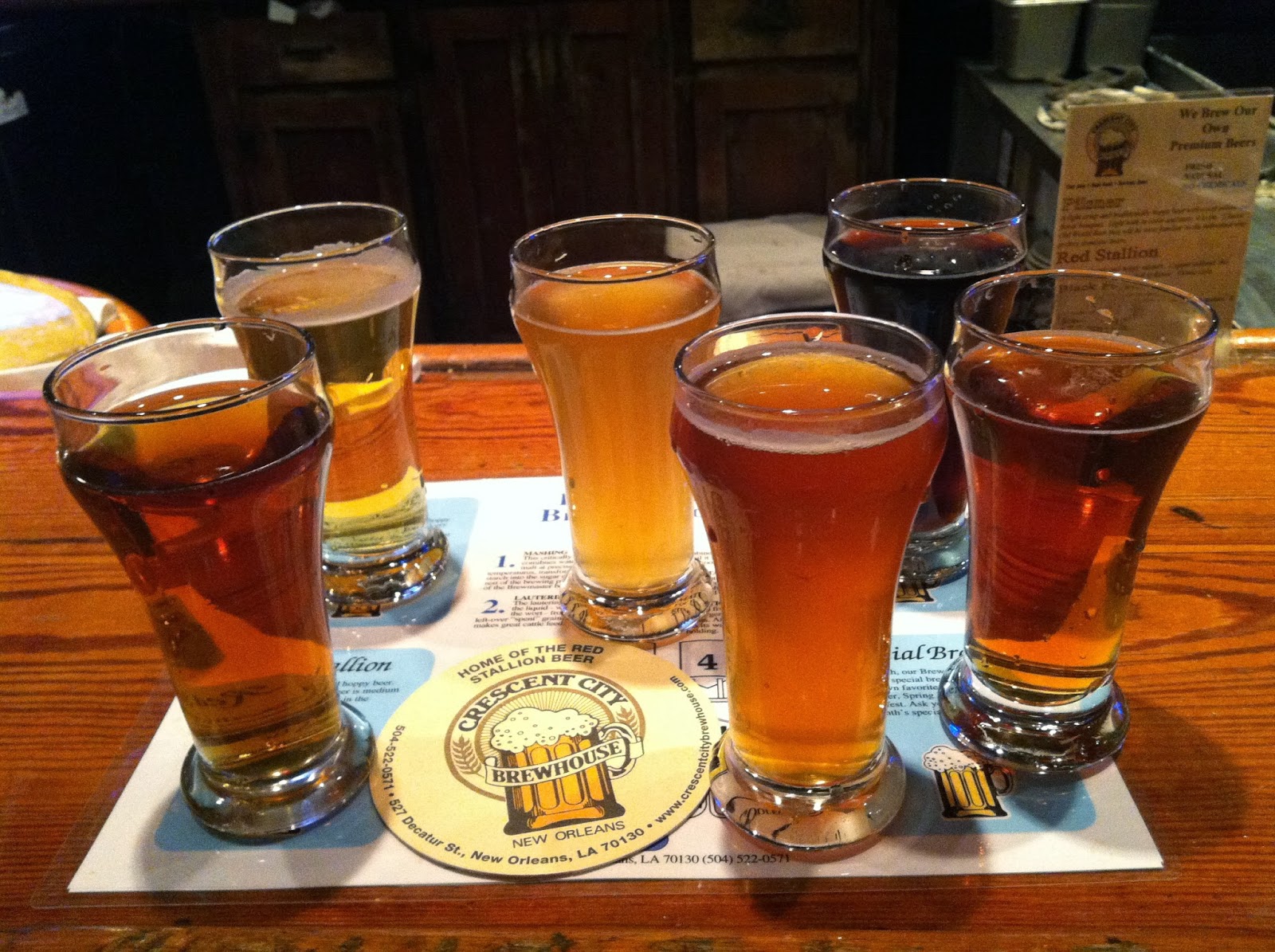 The beers, shown left to right above, are Red Stallion Vienna Lager, Pilsener, Weiss Beer, Bock, Black Forest Dunkel and IPA. The Bock and the IPA were the featured seasonal brews. I slowly worked my way through the beers, enjoying the live jazz and simply relaxing after a day of meetings. My personal favorites in the flight were the Black Forest, Red Stallion, and the IPA. The Black Forest Dunkel had a pleasing, mildly roasted malt and caramel flavor. The IPA was moderately hoppy, mostly floral and pine hops, with a hint of sweetness. It's fairly mild as an IPA goes, but still flavorful. Red Stallion Lager had a crisp, toasted grain flavor. We ended up sitting at the end of the bar where the oysters were continually being shucked. My only regret was that I never did get around to enjoying some oysters on the half shell.

Three of the new (to me) Louisiana brewed beverages I tried were discovered during a Saturday evening stroll. We never stayed in one place long; just grab a quick beer and maybe a bite of food, and move on. As with so many of the beers enjoyed over the weekend, that meant drinking from a plastic cup on the go. Not the best way to experience a beer, but certainly conducive to drinking while walking to the next stop.

I had a solo cup, or maybe two, of Mechahopzilla from NOLA Brewing to start the evening, along with some Breaded Crawfish. This Double IPA has plenty of bitter citrus flavors with a fairly strong malty background. Mildish for a Double IPA, and at 8.8% ABV, not too hard to enjoy either. :-)

I enjoyed two beers from Bayou Teche Brewing, during two different stops in the evening. The first, LA-31 Bière Pâle, was a nutty, earthy pale ale with floral and bitter hops. Later in the evening, at another pub, I spied a tap handle for LA-31 Bière Noire, and in the interest of completeness, I had to try it too. This one was a Schwarzbier, or Dark Ale. It had a mild roasted coffee and chocolate flavor to it, with a slightly sweet and dry finish.

One of the last sights I took in before heading to the airport on Sunday was Lafitte’s Blacksmith Shop Bar. Said to be the oldest structure used as a bar in the United States, the shop was built around 1772. Legends claims it was once used as the base of operations for Jean and Pierre Lafittte's smuggling operations. Unfortunately, I didn't have time to go in and enjoy a beer. 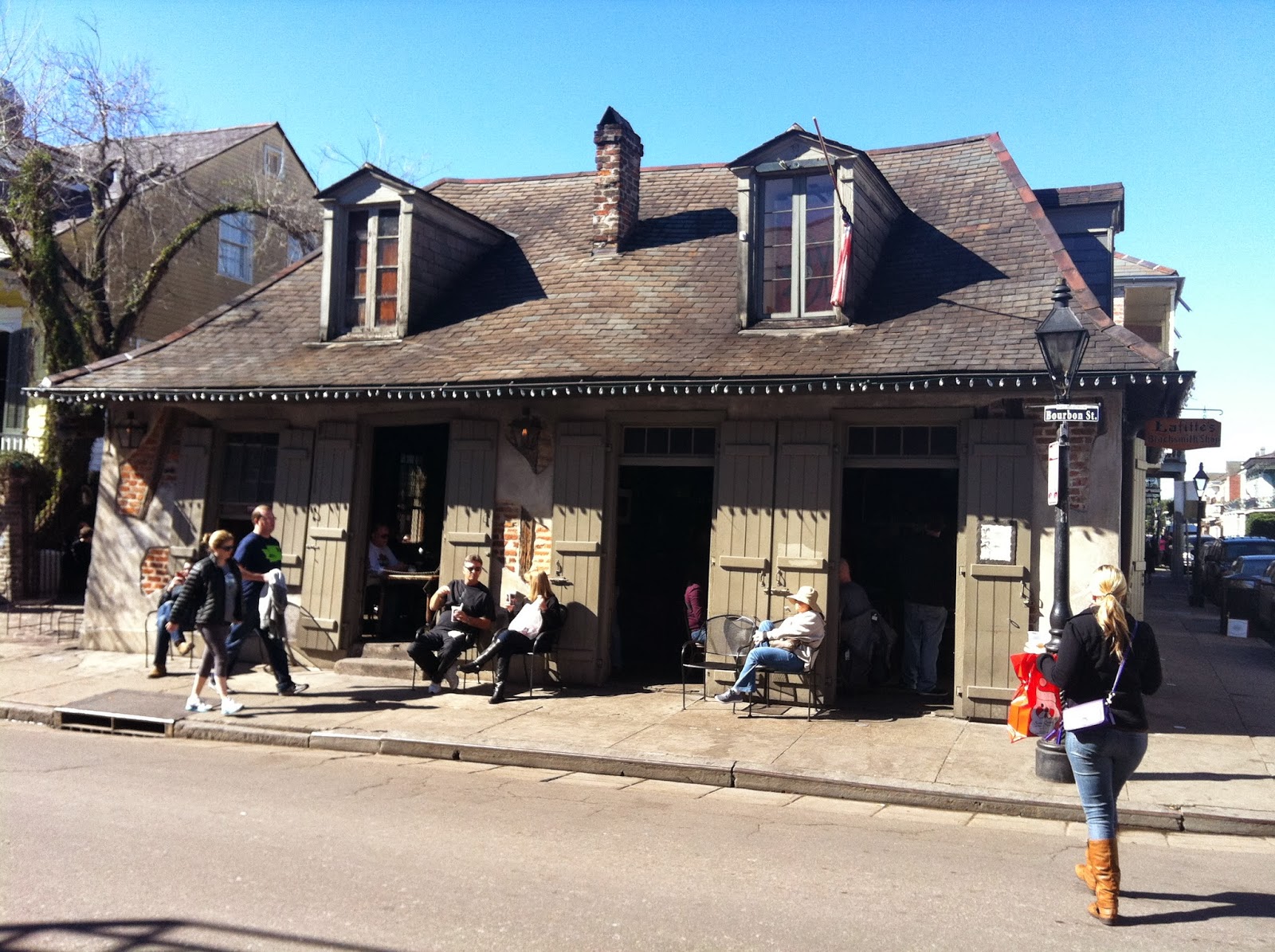 Getting to try a grand total of thirteen different regional beers certainly helped make up for time spent trapped in a hotel meeting room. I didn't get to enjoy as much local food as I had hoped, and I saw many interesting pubs still to be checked out, but it was a fun trip. And there will surely be a next time!