This past Sunday, Tom Givens of the Memphis, TN based Rangemaster training organization presented a Defensive Shotgun class in Culpeper, VA. The class was hosted by John Murphy at FPF Training. Tom was assisted by Lynn Givens who is a knowledgeable instructor herself. I attended the class with Colleen, and our good friend and frequent shooting partner, "Checkered Flag."

The course opened, as all gun training should, with a reminder lecture on gun safety and range rules. Throughout the day, we took breaks from shooting to discuss topics such as shotgun modification and accessories, ammunition types and history. A lot of misconceptions about the shotgun were corrected during the course of the day.

The hands-on drills started out with us learning how to properly, and efficiently, manipulate the weapon. This includes properly mounting the gun, and keeping it loaded and running. That's the key to successful use in a defensive situation. Unlike your semi-auto pistol, or rifle, once you shoot a pump shotgun, it's no more than a club until there's another round loaded. We spent a lot of time doing dry fire, and then live fire, ingraining the bang-chunk-chunk rhythm to load a round without delay after firing. Later drills concentrated on properly loading rounds into both loaded and empty weapons. In fact, everything we did the entire day was designed to emphasize getting the weapon into the fight quickly, and keeping it there.

Although most of the practice was done with inexpensive birdshot, the exercises were focused on the idea that a defensive civilian gun would be loaded with buckshot. One major shotgun fallacy which was debunked is that "you don't have to aim a shotgun." Yes, you do even at close range, unless you want to risk losing the fight, or even killing your neighbor with an errant buckshot pellet. Even at 5 yards it's easy to have a shot miss the center of the bad guy. Most of our work was done at a real-world distance of 5 yards. In addition, we patterned our guns with buckshot and slugs out to about 20 yards. I was quite surprised to learn that with quality 00 buckshot, even out to 20 yards, it's possible to put a single, compact hole in the paper target. (Unfortunately, most in the class had brought along cheaper training ammo, but Tom gave us all a round of Federal FlightControl Wad so we could see what our guns could do.) 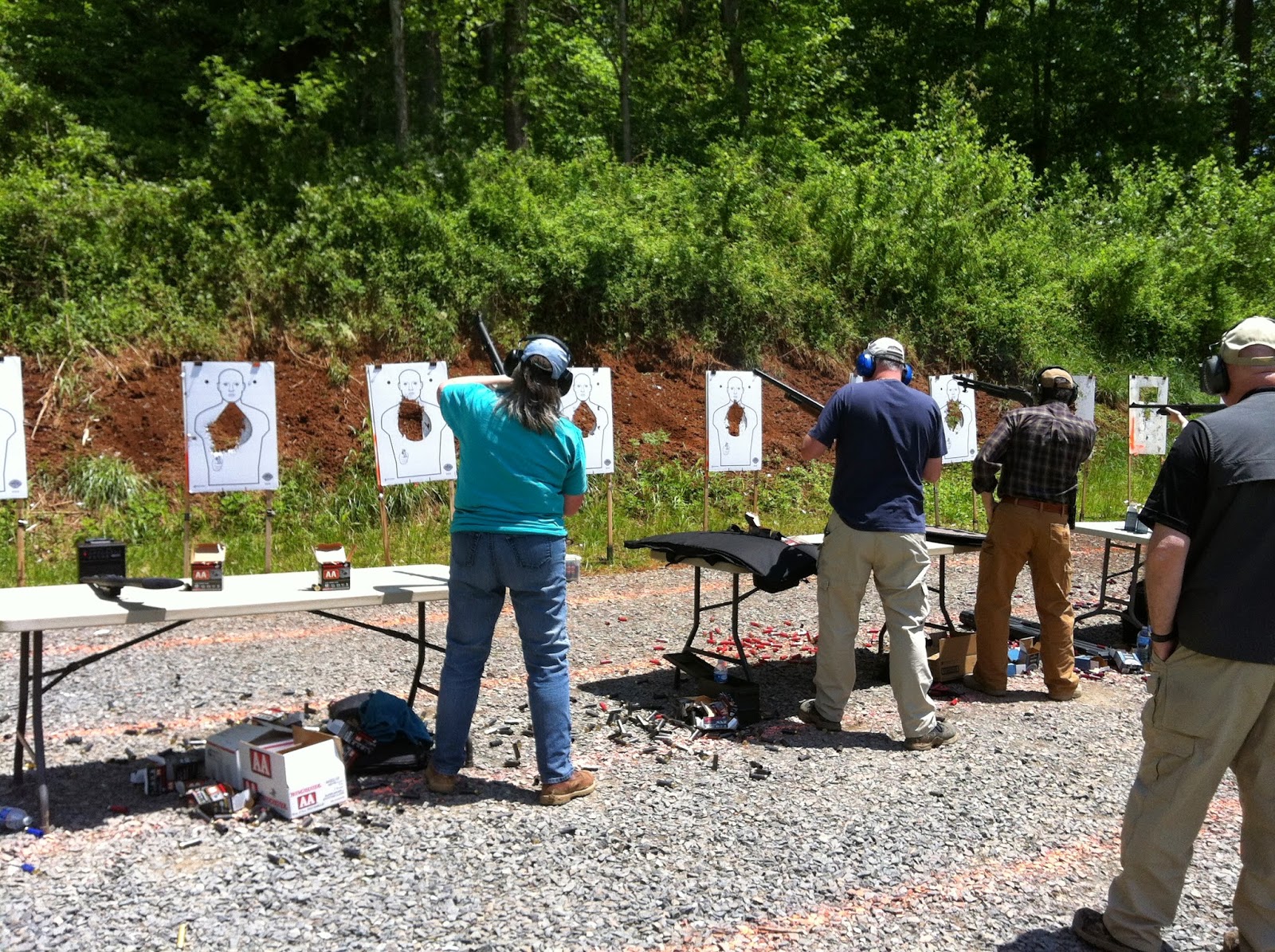 I will not write up all of what we did and learned that day. You need to take the class and do the work yourself to learn it. However, I'll share a couple of very illustrative drills that helped to emphasize the critical points of weapon manipulation and aiming. One such drill Tom calls "Rolling Thunder." We were divided up into groups of 5 or 6 shooters. At the start command, all would load a single round, and each shooter would fire in turn immediately after the previous shooter finished. Immediately after shooting that first shot, you had to load two rounds and be ready to fire both before the "rolling thunder" came back around to you. After 2 shots, you would then load three and fire all when your turn came again. After that, you loaded and fired four. That's when the pressure really built as you didn't want to be the one to not be reloaded and ready to fire when your turn came.

The final drill of the day was a man-on-man competition. We started with two rounds of buckshot loaded in the gun. The drill was to fire three rounds into the head of an FBI 'Q' target before your opponent did, so there would be an emergency reload involved as well. All pellets had to be contained within the head or you lost. Sadly, I pulled my first shot a bit to the left, which meant my opponent had beaten me. But that's okay, I have no problem being married to a beautiful lady who can also run a defensive shotgun! It's all about teamwork.

I was suffering through a few aches and pains the following day. Still, I'm looking forward to getting back on the range to practice and hone these new-found skills. The shotgun is an excellent and highly effective home defense tool. It's also very misunderstood. There's a lot of internet (and gun store) misconceptions about the weapon and how it is used. At the end of the day, I was not surprised by how little I knew, but was truly impressed by how much I had learned. I will also admit, despite all the hard work to learn critical skills, it was an amazingly fun class. We ended up shooting 150 rounds of birdshot, about 50 buckshot, as well as a few slugs. Tom Givens is a respected trainer and an excellent teacher. If you have a shotgun for home defense, I strongly recommend you take his course, or at the very least, get training from a competent instructor. 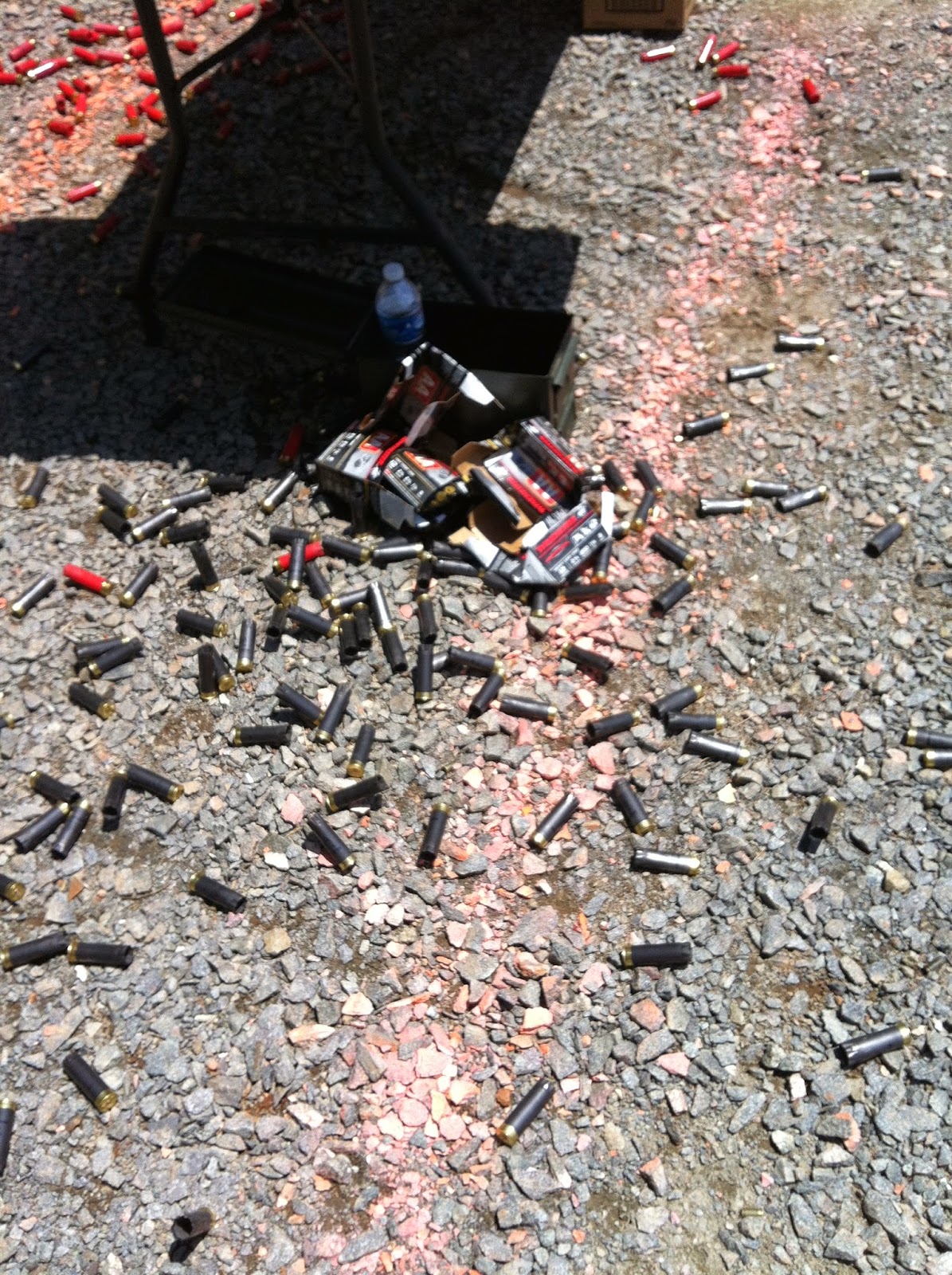