An Evening of Oak at Spencer Devon

We made a visit downtown for dinner at Spencer Devon this week. I had previously seen a post on their Facebook page that they were debuting oak barrel aged versions of two of their beers. Naturally I felt a duty to readers of these Musings to check them out and report back.

In a twist from what is commonly done, Spencer Devon aged these two beers in virgin oak barrels. The barrels came from Fredericksburg’s Bowman Distillery, but had not yet held whiskey. The flavors imparted by the barrels would be from the oak and the char in the barrel, not from any remnant bourbon.

The first beer tried was Oak-aged Olde Towne Old Ale. The base beer was one we never had a chance to try. It was available only for a short time when Spencer Devon first opened, so I was very much looking forward trying it. The beer pours a deep, copper color with a thin beige head. Surprisingly the dark fruit aroma also has strong bourbon notes. Likewise, the bourbon-like aspect is present in the flavor. In fact, the beer could be described as “boozy.” However, it’s not a burn or unpleasant booze flavor though. The Old Ale also has rich dark fruit flavors, and a pleasant malt finish. At a moderate 7.8% ABV, it’s a bit of a sipper, but it’s smooth and flavorful enough that just sipping is a challenge. 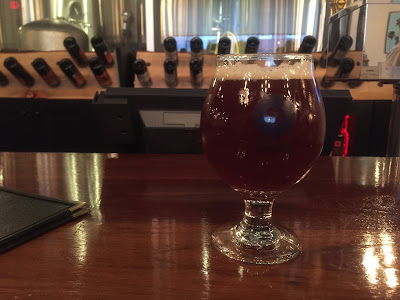 The second beer we tried was the Oak-aged version of Spencer Devon’s 3-4-5 Pilsner. Admittedly, I was not initially interested in trying this one. The 3-4-5 Pilsner is an excellent beer that I’ve enjoyed in the past, and I wasn’t sure what the oak-barrel would add. When it came time to order a second beer to enjoy with my dinner, I was about to settle on my usual Fall Line APA. Then owner Shawn offered a taste of the aged Pilsner. I immediately change my mind and ordered that one.

Oak-aged 3-4-5 Pilsner has a sweet, bready and oak aroma. It’s slightly reminiscent of a cider. The flavor has the combined bitterness and mild sweetness of the base beer. The oak barrel treatment adds a chardonney-like note to the flavor profile. The finish is dry and very clean. No ABV was listed for the beer, but the base 3-4-5 Pilsner checks in at a mild 4%, so I’d expect this to be the same. The Pilsner turned out to be an excellent pairing with my breaded pork tenderloin sandwich topped with lemon caper mayo and house cured pickles.

Spencer Devon has more barrel-aged beers coming in the near future. They also plan to reuse these barrels to age some sour beers. I’m looking forward to seeing, and tasting, those too.