This weekend we visited a friend in Purcellville, VA and our plans for the day included our first visit to Corcoran Brewing Company. The brewery shares a building a medical care center, and I found the juxtaposition of the brewery and urgent care signs to be humorous. There are times I do think craft beer counts as urgent care! 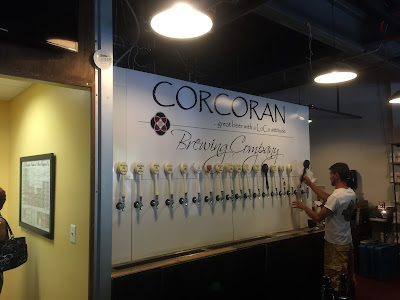 As we walked into the brewery and I spied the line of tap handles, I thought “We don’t have enough time!” I prefer full servings of beer over tasting flights when trying out new beers, but as I perused the beer list it was obvious the tasting plan for the day would make use of the flight. I selected five beers to try in 3 ounce samples, while Colleen and our friend opted for full pints. That made 7 beers I’d get to taste. 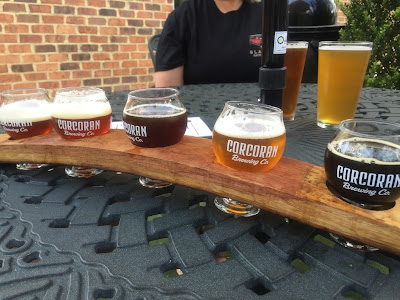 My flight consisted of Corky’s Irish Red Ale, Catoctin Ale, Hallowed Be Thy Ale, P’ville Pale Ale, and Once You Go Black.

The Corky’s Irish Red Ale was available served on nitro, or standard CO2. I opted for the nitro pour. In retrospect, I think I would have preferred the standard serving. The ale was very mildly flavored; it was my impression that the nitro softened the flavor too much. Next up was the Catoctin Ale, which is an English Pale Ale. This too was a lightly flavored, thin bodied ale, that was not too distinct from my first beer.

The flight experience improved with the next beer, Hallowed Be Thy Ale. This is an English Old Ale, that has been aged in oak barrels. Dark fruit, caramel, honey, and bready malts combined with a hint of bitter citrus in the finish. P’ville Pale Ale was a mild pale ale with pine and grassy notes.

The final beer in the flight, Once You Go Black, is a Black IPA. The aroma of dark roasted coffee and bittersweet chocolate was a bold switch from the previous beers. Sipping the beer, I got a quick hit of citrus hops, before the rich, toasted malt and coffee flavors took over. The finish was bitter but clean and short lived. This was undoubtedly my favorite of the group.

Colleen opted for 4 Saisons, a Saison-style ale, aged in bourbon barrels, and made in collaboration with, I believe, Belly Love Brewing. The beer had a tropical fruit “juiciness” to it and was quite refreshing. In fact I stole several sips from Colleen’s glass. Our friend chose Dutchman’s Creek Hefeweizen. I was struck by the strong aroma of bananas, butter and clove when I took a sniff of the glass. Flavor-wise, the beer is a classic Hefeweizen.

We had a very pleasant time sitting on the outdoor patio and tasting the beers at Corcoran. Some of the beers were a bit lower profile than I prefer, though perhaps the small samples prevented me from getting the full flavor experience. Hallowed Be Thy Ale, Once You Go Black, and 4 Saisons were my favorites of the group. If time had allowed, I could have enjoyed full servings of any of them. The brewery also produces several IPAs that I'd like to try on another visit. But we had our sights, and tastebuds, set on dinner at Fireworks Pizza in Leesburg, where we enjoyed some delicious pizza and more good beer.