After last Wednesday's Black Creek match, I was looking forward to the Rivanna IDPA match Saturday; I needed to confirm to myself I still remembered where the front sight was located. I awoke to a beautiful, cool morning — 58 degrees! Eventually the temperatures during the match rose to around 80°, but that's still remarkably pleasant for this time of the year.

The match director had set up four quick stages he termed "efficiency exercises." All the stages were shot from a single shooting position, but still challenged us in unique and fun ways. The first stage I shot had six targets, set up as two groups of three, set out near, but not at, 180 degrees apart. The shooter stood in the middle, body squared to the berm in the center. You first engaged the inside, closest target in one group, than swung to the opposite group to shoot the inside target. Then it was back to the middle target in the opposite side, then back to the middle on the opposite side, and so on... Getting your eyes on the next target before the gun was the trick to keep from over swinging. I ended up just two points down on the stage. Okay, I feel better already!

The next stage required three magazines, downloaded to 6 rounds each, and the unloaded gun set on a table. While standing behind the table, you loaded the gun, engaged the three targets, reloaded from slide lock, shot the targets again, then repeated with the third mag. The center target had 5 tight center hits and a lone disappointing flier down in the kidney area, contributing to a total of 8 down on the stage. I was aware of that low shot when I felt the trigger jerk while I was shooting, but it was a limited stage with no make up shots. Also at one point during the stage a piece of hot brass bounced off the timer held by the SO and came to rest on the back of my neck — grin and bear it, and keep shooting. 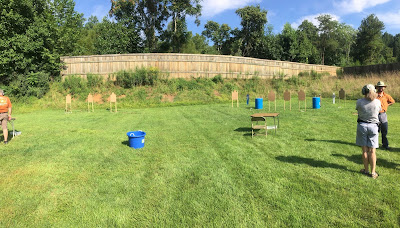 The third stage I shot was one that generated a lot of conversation on how best to attack it. You were seated at a table, with the unloaded gun and mags on the table. There were 5 stationary paper targets, and two falling steel poppers that activated two disappearing targets, which popped up momentarily from behind barrels. The timing of the up and down targets was such that some shooters opted shoot another of the static paper targets after the steel, then return to engage the up-down target. I opted to shoot the steel then wait for the mover, which actually seemed quite slow while I was shooting. I was more interested in accuracy then speed. I got the hits on both movers, and ended 4 down for the stage. (I also witnessed a very skilled shooter engage two of the static targets before returning to the mover!)

The final course of fire was a variation of the barricade stage of the IDPA classifier. The targets were set a bit closer, but were spaced further apart, which meant much harder leans around the barricade to hit the inside targets. After a reload with retention, hitting that far right target from the left side of the barricade was quite a stretch.

The quick stages, and a small squad meant a fast match. I was on the way home by 11:30AM. The match was a lot of fun and I was very pleased with how I shot. There's always room for improvement, but in the end I had few complaints. It was all in all a very enjoyable morning on the range.

The rest of my Saturday was spent pool side enjoying the company of my wife, grilling burgers for dinner, and of course the reward of a good beer.