The availability of "good beer" is so ubiquitous these days, that when the options aren't there, it's somewhat shocking. This weekend we were out of town for the college drop-off and looking for dinner. There weren't a lot of non-fast food options in the town where we stayed, so we decided on a national "Neighborhood Grill and Bar" chain restaurant. When I asked about the beer selection, I was handed this... 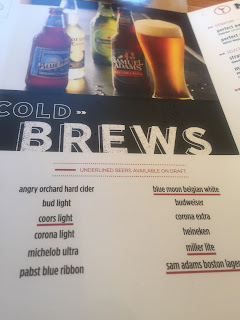 Noticing my grimace, the waitress added that if I was looking for "those imported beers like Yuengling," they also had a "shandy beer" and Sam Adams Summer Ale. After driving for most of the day, I really wanted a beer, so I opted for Boston Lager. After she left, I saw on the food menu an announcement for Sam Adams Octoberfest. Now that would be worth ordering; it's my favorite Sam Adams variety. I called the waitress back and inquired, but she wasn't sure if they had it yet.

In the end, it turned out the Octoberfest had replaced the Summer Ale the night before. I got my beer, even if it was a little early in the season, and all was mostly right with the world.