Just under three months since a catastrophic roof collapse, Capital Ale House in Fredericksburg reopened this week. We didn't visit on opening day, but Colleen and I did make it downtown for dinner and a few beers on the day after the reopening. Taking seats at the bar, we were greeted by familiar staff faces, and began perusing the beer menu. After quickly making our beverage selections, it was time to look over the food menu.

Capital Ale House has added some new options to the menu, while keeping many, but not all, of our favorites. A couple of Virginia beers, Blue Mountain Brewery Humpback Oktoberfest and Fair Winds Brewing Siren's Lure Saison, along with a new Crispy Artichoke appetizer occupied us while we perused the menu further. 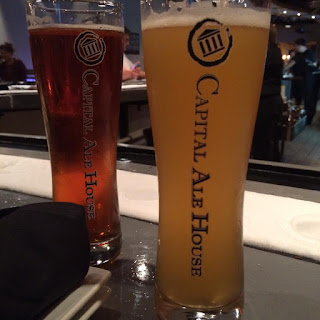 We eventually decided to try out two new items on the menu. Colleen opted for the Pork Belly Tacos, and I ordered the Hub Cap, a Schnitzel Sandwich, served on a Pretzel Roll with Caramelized Onions and a spicy mayonnaise. To go with the flavorful sandwich I opted for a Great Dismal Black IPA from O'Connor Brewing in Norfolk, VA. The roasted and hoppy flavor comibation of the ale went quite well with the sandwich. As it turned out, there were a few O'Connor pint glasses left over from the previous evening's "Steal the Glass" night so I ended up with a souvenir glass as well — not that I really need anymore beer glasses.

We even opted for a celebratory dessert of the Giant Carrot Cake, while we enjoyed our beverages. It's good to have Capital Ale House open again and back on our list of options to visit when we're heading out in search of good beer.