On August 29, a brave Christian warrior moved one step closer to Sainthood when the Church beatified Bishop Flavien-Michel Malké. Bishop Malké was martyred in 1915 for refusing denounce his Christian faith and side with the "religion of peace." From National Catholic Register... 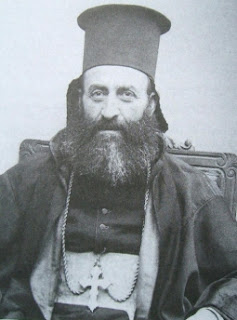 Bishop Malké will be beatified Aug. 29, the 100th anniversary of his martyrdom, during a liturgy celebrated by Ignatius Youssef III Younan, the Syriac patriarch of Antioch, at the convent of Our Lady of Deliverance in Lebanon. It is expected that thousands of Syrians and Iraqis displaced by the Islamic State will attend the beatification.

“In these painful times experienced by Christians, especially the Syriac communities in Iraq and Syria, the news of the beatification of one of their martyrs, will surely bring encouragement and consolation to face today's trials of appalling dimension,” read an Aug. 9 statement of the Syriac Patriarchate of Antioch.

“Blessed Martyr Michael, intercede for us, and protect especially the Christians in the Orient and all the world in these hard and painful days.”

After his conversion, he was ordained a priest in Aleppo in 1883. He was a member of the Fraternity of St. Ephrem and served parishes in southeastern Turkey, near his home.

Ottoman persecution of Christians began in earnest with the Hamidian massacres of 1894-1897. Malké's church and home were sacked and burned in 1895, and many of his parishioners were murdered, including his mother. In total, the massacres killed between 80,000 and 300,000 Christians.

He was selected to become a bishop in the 1890s, serving as a chorbishop and helping in the rebuilding of Christian villages. In 1913, he was consecrated bishop and appointed head of the Syriac Diocese of Gazireh (modern-day Cizre, 150 miles southeast of Diyarbakir).

A second round of persecution of Christians in the Ottoman Empire began in April 1915. Known as the Armenian Genocide, it targeted the Armenian, Assyrian and Greek Christian minorities in the empire. The Assyrian genocide (the portion of the mass killings directed against Syriac and Chaldean Christians) is also known as the Seyfo Massacre, from the Syriac word for sword.

Some 1.5 million Christians were killed, and millions more were displaced during the genocide.

During the summer when the genocide broke out, Bishop Malké was in the Idil district, near Gazireh. In June 1915, hearing the Ottoman forces were preparing to massacre Gazireh's people, he returned.

According to the Syriac Patriarchate, when his friends and acquaintances urged him to withdraw from Gazireh to a safer location, he replied, “Even my blood I will shed for my sheep.”

Together with four of his priests and the Chaldean bishop of Gazireh, Philippe-Jacques Abraham, he was arrested and imprisoned for two months.

Of course, we are well-aware that muslim persecution of Christians and other non-muslims continues unabated today. May Blessed Flavien-Michel Malké intercede for victims of islam the word over.

Update: YouTube video of the Divine Liturgy, in the Syriac Catholic Rite, for the Beatification of Bishop Flavien-Michel Malké.
Mused by David