A Visit to South Street Brewery

Looking for something to do on Sunday, we decided to take a drive out to Charlottesville to visit South Street Brewery. We had never been to the landmark brewery and it was a nice afternoon for a drive. We arrived mid-afternoon and there were only a few other folks in the brewpub at the time.

Not being in any hurry, we started off with a couple of beers and the Meat and Cheese Board appetizer. Colleen selected Anastasia's Chocolate Fantasy Imperial Stout. This was a rich tasting stout with dark roasted espresso and bitter chocolate flavors. My selection was Land of Milk and Honey Old Ale, a collaborative brew with Brothers Brewing in Harrisonburg, VA. The light bodied ale had a smooth caramel malt flavor with just a hint of alcohol detected. We lingered over our beers and appetizer trying to decide on our next course of action. There were a dozen beers being offered, with several very tempting options. We also had tough decisions to make regarding our food selections. 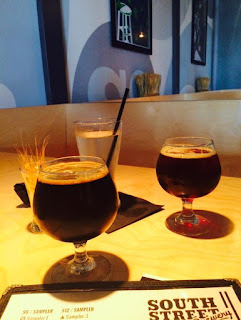 Eventually we decided on a couple of the South Street sandwich offerings and beers to accompany; the Turkey Club and Slippery When Wit for Colleen, a Pot Roast Grilled Cheese and Spelter Skelter IPA for me. Slippery When Wit is described as a Gose/Witbier hybrid. The predominate flavor of this beer is that of a classic Witbier, but there's also a moderate tart fruit twist thrown in.

Spelter Skelter is a bright orange ale with a strong grapefruit aroma. I'm a fan of bold citrus flavors, but after the smooth malt of the Old Ale, the first sip was somewhat of a shock. After a few sips, my taste buds were "reset" and I found the beer quite enjoyable. Once I started into my jalapeño-spiced sandwich, the bold flavor of the ale was most welcome.

We enjoyed our afternoon outing very much. The drive through the countryside was fall picture perfect, the food was tasty and the beer excellent. There were a few other beers on the menu I wanted to try out. Fortunately, South Street is not too far off the path of other trips that take us past Charlottesville, so there's a chance I'll be checking those other options in the near future.