During a recent trip to the Outer Banks, we took a drive from Kitty Hawk down towards Hatteras. It was one of the few days during the week when the sun made an appearance, so it was a very enjoyable and scenic drive. Eventually we decided to stop for lunch, and pulled into Capt'n Rolo's Raw Bar and Grill purely by chance.

Capt'n Rolo's is a small place and was quite busy when we entered. We had a seat at the bar, and soon realized that a single person was taking orders and serving food. The waitress was working hard and in constant motion, but soon got us our drinks with a smile, even taking time to offer a sample of a beer I was not familiar with.

My lunch beer choice was Double Barley Brewing Touche' IPA. This easy drinking beer has a floral and citrus aroma. The flavor leans towards citrus with a touch of bitterness. The creamy mouthfeel finishes clean with just a hint of bitterness. A moderate 6.8%ABV and well-balanced flavor made for a nice lunchtime libation.

For the food portion of lunch, I opted for a Fried Oyster Sandwich. I've ordered a lot of fried oyster sandwiches over the years. I've had some good ones, and some less than good offerings. Often I've been disappointed in the bread-to-oyster ratio. Well, the basket that was set in front of me was a sight to behold! Plump, lightly breaded oysters were piled high on the slightly toasted roll. I turned to Colleen and said, "I'm not sure how to eat this." 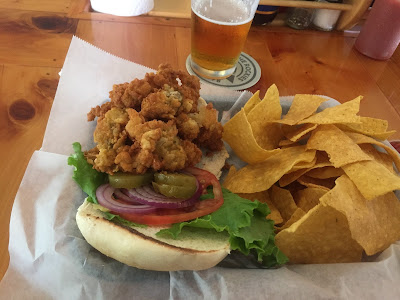 I put the pieces together and attacked with both hands. The sandwich tasted as good as it looked. The oysters were juicy and flavorful. Even the "salad" pieces of the sandwich were crisp and fresh. At the end, I had plenty of extra oysters left on the plate to enjoy alone. This was definitely one of the best fried oyster sandwiches, even oyster meals in general, that I've had in a long time. Colleen opted for a Caesar Chicken Wrap that was also flavorful, and huge. It reminded me, in size, of those giant California burritos we had out west many years ago. Half of her sandwich was brought home to be enjoyed later.

We finished our meals well after the mid-afternoon closing time of Capt'n Rolo's, but we were never rushed and the server was attentive, despite being busy and running the place by herself. (They reopen for dinner, BTW.) If Capt'n Rolo's wasn't about an hour's drive from where we were staying, I would have gone back for another meal. The food was delicious and served in generous proportions. We'll definitely return the next time we visit the Outer Banks.