"What am I doing?' Those were the thoughts in my head as I headed out early Saturday morning for the monthly Rivanna IDPA match, with the dashboard displaying 39°. But I had packed gloves and a fleece jacket, so I was ready for a fun morning of shooting.

There were four stages providing our entertainment that morning. Stage 1 started with the shooter holding a shovel, which was used to knocked over a nearby popper, triggering a drop turner. I was wearing the fleece jacket rather than my "gamer" IDPA vest but was still able to get the shots off on the fast disappearing target. There were six more targets down range to be engaged.

The next stage began standing arms length from a single target which required three shots from retention. Backing up from that target, we found three targets to the right of a wall, followed by three to the left of a parallel wall. I was actually "down zero" with what I consider a respectable time for the run. I distinctly remember a sharp focus on the sights and being conscious of the trigger pull and my grip on the stage. I should do that more often! 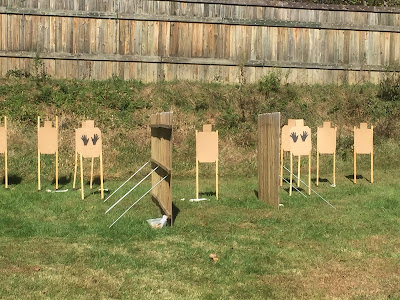 The third stage of the match required distance shots and elicited a lot of groans from the shooters, and also a lot of good natured ribbing. The targets were estimated to be placed at 15, 25 and 35 yards. Two targets at each distance required three hits on each. My plan for the stage was, "I have 31 rounds, why leave any behind?" I was there to shoot, so I might as well shoot. I wasn't going to win any steak knives anyway. Despite the good-natured "complaining" it was fun, especially since I rarely get to shoot anything beyond 20 - 25 yards.

Stage 4 was designed to keep our brains working. The stage was divided into three "sections" each holding three targets. All magazines were downloaded to just six rounds each, and all shooting was to be done on the move. The course of fire started with the shooter engaging the first three targets, in tactical sequence, while retreating. Reloading before leaving the cover position marking the next section, we found three targets to be engaged, in any order, while moving across the bay. After another slide lock reload, there were three more targets, again to be engaged in tactical sequence, this time while moving forward. It was a lot of fun, and being the first stage our squad shot, was a good way to wake up the brain cells.

As usual, the Rivanna match provided good shooting with a range of challenges. This was the first year I've shot Rivanna IDPA, and have thoroughly enjoyed it. The matches are well-run, folks are friendly, and it's always a good time. The only downside to Rivanna is that the match conflicts with the Cavalier USPSA match, which I have also enjoyed shooting in the past. Even though I concentrated on IDPA this year, I'd still like to get to some USPSA matches in the future. Too many matches on the same day; a good "problem" to have I guess. Maybe I'll need to alternate next year.