Prior to our visit last weekend, I'd had tried only one Parkway Brewing beer, Get Bent Mountain IPA. I've enjoyed that one on draft several times, and even bottles in the fridge. It's a really good IPA, so I had I high hopes for more good beer during out visit. I was not to be disappointed.

We opted to try a flight of six beers, choosing from the ten available. We enjoyed our beers in the large seating area that was open to the outdoors, in front of a wonderfully relaxing fireplace. 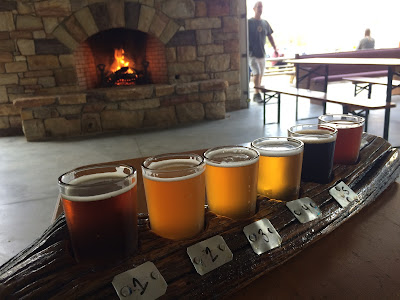 First up on our Parkway Brewing flight was Seeing Colors Spiced Autumn Ale, a brown ale brewed with cinnamon, ginger, allspice, clove and nutmeg. The beer had a pleasant aroma and classic fall spice beer flavor. As we got to the next beer, Colleen remarked, "Didn't we get the coffee beer?" What was in the glass looked all the world like a Pale Ale; aren't coffee beers usually dark? Picking up the glass, she smiled and announced it did indeed smell like coffee. Cocka Doodle Brew Coffee Ale looks like a Pale Ale, but smells and tastes like fresh brewed coffee. Good fresh brewed coffee at that. There were undertones of a citrusy pale ale, but the coffee flavor, and aroma, predominate. I found it to be an extremely interesting and tasty beer.

Since I'd had Get Bent IPA previously, I opted for the Grapefruit Get Bent Mountain IPA to compare. This version of the beer ramps up the citrus aspect. The flavor brings to mind juicy pink grapefruit flesh, with just a hint of sweetness, like the touch of sugar added to a grapefruit half. Between the Coffee Ale and Grapefruit Get Bent, we had a proper "beer breakfast" going.

The flight up to this point had been relatively moderate in both flavor and ABV. We kicked it up a notch for the second half, starting with Four Damn Fights to a Pint Double IPA. Bold tropical fruit and pine hop flavors combine for a pungent, bitter brew. Following on the heals of the Double IPA was Barrel Aged Ravens Roost Baltic Porter. The alcohol aroma and flavor stood out strong over the dark roasted, mocha and bready porter. Colleen described it "Like a rum and coke, but with bourbon," and that truly hit the essence of the beer.

We closed out the tasting flight with Magellan Belgian Dark Abbey Ale. Despite checking in at 11.1% ABV, the alcohol was amazingly well-masked in both the aroma and flavor. Rich notes of plum, raisin, and dark cherry with a touch of brown sugar made for a very tasty ale. I could see sipping a full glass of this one in front of the fire for a relaxing evening.

Unfortunately we were on a tight schedule and did not have time to linger longer, and enjoy more of the excellent beers at Parkway Brewing. However, we will be passing through the area frequently in the future so I will try to plan for a more extended visit on an upcoming visit. I'm looking forward to enjoying more of the fine ales at Parkway Brewing.