After last weekend's historic snow, and spending a week driving and walking through dirty slush, I was ready for a beer with "Tropical" in its name. While the aroma of barbecued ribs wafted from the oven, I sat down with a glass of Flying Dog Tropical Stout. The beer is the first in the 2016 Brewhouse Rarities series. It's brewed with coconut flakes and fresh pineapple. 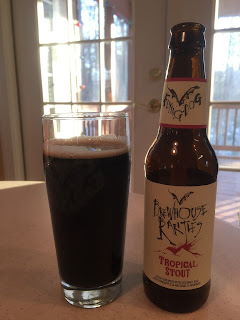 A hard pour built a moderate, but very short lived mocha head over the pitch black beer. The initial aroma was that of tropical fruit and a dark mocha roast. As the beer warmed, I had fleeting hints of coconut as I raised the glass to my lips. The flavor brought juicy pineapple and hop notes, along with a strong roasted malt. The flavor combination was somewhat reminiscent of some Black IPAs I've had. Tropical Stout has a creamy and moderately thick mouthfeel. The combination of roasted malt and citrus hops was joined by hints of coconut in the finish. The coconut flavor is mild throughout, but makes its strongest appearance in the finish.

I nursed my beer long enough to enjoy some of it with the ribs at dinner. The mild hoppiness and roasted flavors did pair well with the spicy barbecue. I enjoyed the roasted and mocha flavors of the stout, but the hints of the coconut and pineapple were fleeting. As I downed the last sip from my glass, I paused and looked at the glass, wishing I had just another sip or two to try and catch the ephemeral tropical flavors.