Due in part to 15 days straight with rain, it's been over three weeks since I made it to the range. When I saw the sun peak out Friday afternoon, I grabbed my range bag and quickly headed out to get in some shooting time. The target supplies were already loaded in the car, where they've been for a week now, just in case. I expected the bays to be muddy, but I managed to find a space that was mostly grass and gravel. There was standing water, but at least I wasn't slipping and sliding in Virginia red clay. 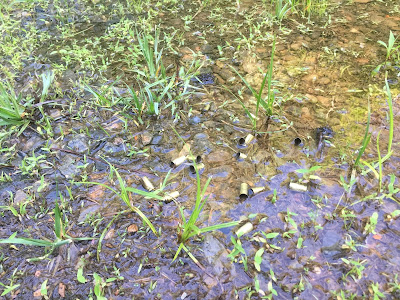 While anticipating the wet conditions, I also knew it would be a good bet that I wouldn't be spied on by the range officers. I hung a couple of targets and prepared to get in some practice on target transitions and multiple shot strings.

I started out shooting my EDC gun, from concealment. I'm making an effort to start every practice session a few magazines "as I carry." That done, the next hour was spent shooting on the move, shooting strong and weak-hand only, distance shots, and even long strings of fire. It was glorious!

Eventually the ammo boxes were empty and I was starting to feel the 200 trigger presses in my hand. Searching the puddles for my brass was an adventure. I was surprised how quickly some of the casings were sinking into the saturated ground.

Besides all the rain, the past couple weeks have been extremely busy at work. A few hoped for range visits were cancelled due to extra long meetings and phone calls. It was great to finally get out to the range and spend some time being distracted from all that "life" stuff. Self defense and competition goals aside, just getting out and shooting is a relaxing pastime.