The way the calendar worked out this month, the Rivanna and Cavalier IDPA matches fell on the same weekend, so I shot the former on Saturday and the latter on Sunday. It's been a while since I could make it to Cavalier for their monthly IDPA match, so I was quite eager to return despite the busy weekend. Driving to the range I encountered heavy rain, and that's when I realized I left my jacket at home, and the rain jacket I (usually) keep in my range bag had not been returned to its place after its last wearing. Fortunately the heavy rain was short-lived, and we faced only intermittent rain during the match.

The stages in the match were not especially difficult, but they offered different and enjoyable challenges, including some inconveniently placed non-threats and head shots. On stage one, we started off by engaging a close target offering a partial head area. Three more targets were engaged between some barrels, before the stage ended with another head shot target, and a full target seen by a hard lean around cover. 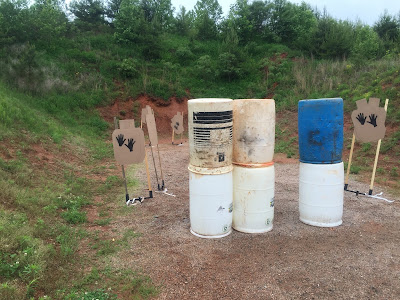 Stage two started with a close partial target and a distant target, before we headed down range to engage two more targets from behind cover. At the final position were two more targets, one partial and one full. It seemed pretty simple but the target positioning required attention as some no-shoots were placed behind cover so that the head area appeared first, and tempted a shot if you weren't careful.

The next stage had six targets arranged on either side of an "alley" created by barrels. We started down range at the berm, and the course was shot while backing up and engaging targets as they became visible. The stage seemed straightforward, but the some of the targets had non-threats over them, and I almost shot one before catching myself. 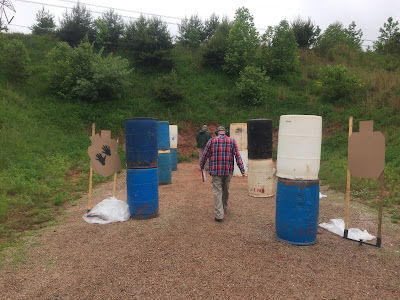 At stage four we found six targets in a line, with a couple non-threats interspersed, along with a shooting area marked with rope and barrels. For this stage all magazines were downloaded to six rounds; we started with a loaded gun and two magazines left on the barrels.  At the start we engaged each target with one shot each while advancing to the first barrel. Retrieving a magazine from the barrel, the targets were engaged again while moving right to left. Finally, the third magazine was grabbed and the targets were engaged again while retreating. I felt myself let the gun move as I stepped a few times but knew I had no makeup rounds.

The final stage of the match used the same six targets. This time they were shot from behind cover, three targets from each side of the barrel stack. I ended up shooting low on most of the targets, even though they were only about 12 yards out. I try to learn from each match and this is something I need to work on. As I've noticed in the IDPA classifier I tend to shoot low when leaning around a barricade. Other than a bunch of -1 hits, all shots were on target. 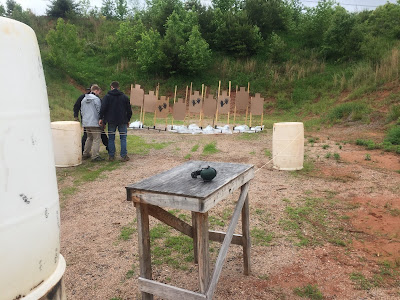 Despite the intermittent rain, the morning shooting event made for a pleasant outing. The match ran smoothly and quickly, and I felt like I shot well. By just a little after 11:00 AM I was in the car and heading home. That left plenty of time for an afternoon nap, something that was greatly needed after two early morning starts this weekend.