July. In Virginia. The weather is expected to be hot. Very hot. For Sunday's Cavalier IDPA Match, that condition was met, in the extreme. I hadn't shot a match in three weeks, so I sure wasn't going to let a bit of oppressive summer weather and a heat advisory stand in the way of the fun.

This month's match consisted of five quick stages. The first stage had us seated at a table with the loaded gun under a magazine and all mags on the table as well.  Five targets and three non-threats where in front of us. The targets were to be engaged in tactical sequence while seated. Most of the targets where partially exposed with one being further downrange than the others. 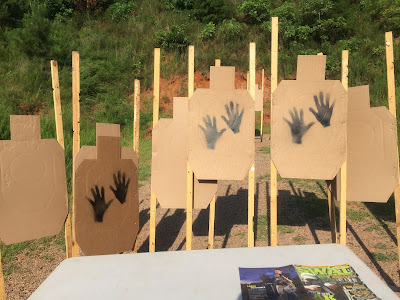 The last four stages were shot on the remnants of a couple of stages left from a USPSA match held the previous weekend. When we first approached the stages, I thought, "That's a lot of targets and walls." However there were actually two IDPA stages embedded in each setup. Careful attention in the walkthrough was required to make sure you were shooting at the correct targets. During my walkthrough of one course of fire I at first planned to shoot the wrong target, before realizing my target count was off and I took another look. However, except for a couple targets that you just had to remember not to shoot, paying attention to cover generally allowed only the correct targets to be engaged. Each of the resulting four courses of fire required a lot of moving around walls between shooting positions. The stages may have a little more complex than a typical IDPA stage, but they provided fun challenges. Most also offered options on the way they could be shot, depending on shooter preference.

The match was a lot of fun and everyone seemed to have a good time despite the heat. While my dashboard thermometer read "only" 91°, the heat index was over 100°. Truth be told, I prefer the heat, even extreme heat, over shooting in the winter. I'm not fan of cold weather. I struggled at times with sweat inside my shooting glasses, as well as wet hands. At one point, I noticed my mags were coming out of the pouches wet. Despite all that, I had a good match and was pleased with my scores.

Arriving home after the match, I finished up a weekend painting project. That done, it was finally time for a cool shower and a good beer. And then an unplanned nap in my favorite recliner.