While I'm not as avid about it as I was a few years ago, I still try to get in some dry fire practice once or twice a week. I generally use my shot timer to start each practice string. However, since the timer doesn't pick up the hammer fall from the unloaded gun, it's of limited use in this situation. While it's possible to set short par times to get the approximate time to the first shot, there's no measurement for subsequent shots.

At one time I used the SureFire timer app on my iPhone for timing during dry fire, but that app stopped working on newer phones and is now no longer available. Recently I ran across Practical Shooting Timer. This iPhone app comes in both a free version and a Pro version that has a few additional features.

Practical Shooting Timer offers the same basic features as a standard shot timer. You can set the start beep to be instant, delayed or random. The timer screen shows times for first and last shot times, and the review function allows a review of all the splits in a string. There are also par time and repeat settings. 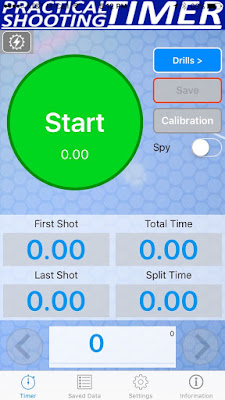 Of course, for my purposes, the real test would be if the app picked up the sounds of dry fire. The application has a sensitivity adjustment and even comes with a dry fire preset. I found that on my iPhone 6 the double action hammer clicks on my Sig were detected with no problems. I set the phone on a table and stood 4-5 feet away and the "shots" were recorded reliably. For drills involving movement, putting the phone on a belt clip works well.

When setting up a drill in the app, you can also optionally add an editable "Standby" command. (Though I wasn't able to get the app the give the "Staaaaaandbyyyyy" inflection usually heard on the range.) You can also add a handy "Make Ready" command and delay. For my draw practice I set up a drill with a random start, added "Make Ready" and "Standby" commands, and set it to repeat five times. This allowed me to hit the start button once and practice drawing and shooting multiple times without resetting the timer.

The Pro version of the application removes the small ads at the top of the screen. There are additional settings to create and save multiple drill settings, and the ability to set two par times in a string. The paid app also has a "spy mode" setting that I did not test. Otherwise the functionality of the apps are the same.

After a few practice sessions I came across a couple minor issues. On occasion the microphone stopped picking up the sounds but tapping the calibration button quickly corrected that. While you can save the shot data from a string of fire to a file for later review, when using the repeat function, the shot data is reset after each string so only the last string is saved. I would like to see that feature changed so that I don't have to look at the timer between each string in a repeated drill.

While I'll stick with my real shot timer for live fire at the range, I will keep the Practical Shooting Timer app around for dry fire practice. I was very pleased with the ease of using the iPhone application, as well as the reliable "shot" recording. Being able to accurately record all the shots and splits during dry fire will certainly be beneficial. Maybe it'll even motivate me to practice more often.