Another local brewery we visited while in Montana was the Flathead Lake Brewing in Bigfork. We had driven by several times during our visit and had noticed the brewpub parking lot was always very full around dinner time. This was obviously a popular stop.

Colleen and I started out by sharing a five beer flight. The beers in the flight, moving clockwise from the top in the picture below, are; Bufflehead Brown Ale, Rising Sun Espresso Porter, Two Rivers Pale Ale, Centennial IPA, and Swimmer's Itch Saison. 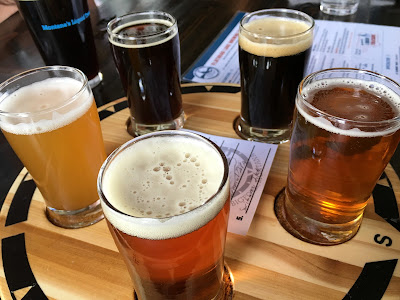 Tasting all of these beers didn't the ease our choice for a beer to have with our dinner. We found them all to be very well done and quite tasty. Colleen particularly enjoyed the Saison and the Espresso Porter. My favorites were the Pale Ale and IPA (no surprise there.)

The food options at Flathead Brewing were diverse and the decisions there were equally challenging. Colleen eventually selected the Clam Chowder served in a bread bowl, accompanied by a pint of the Espresso Porter. My dinner consisted of the Centennial IPA and Alehouse Tacos with blackened shrimp. The large soft flour tacos were overstuffed with apple slaw, grilled pineapple pico, and cajun aioli. Large servings is a theme we saw repeated at most of our meals in Montana. My only dissapointement was that the copious shrimp in the tacos did not seem "blackened", but were somewhat plain. Despite lacking the expected and desired spiciness, the tacos were still enjoyable. We topped off our dinner with some light, and delicious, Montana "Moose."

We opted to take advantage of the outdoor seating at the brewing. The deck was in the trees and overlooked the picturesque Flathead Lake. While the temperature was a little cool, it was quite a pleasant setting. 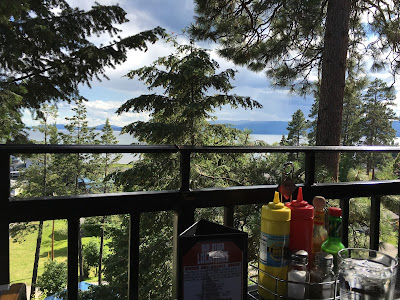 Good beers, good food, attentive service, and a great view. It's not hard to see why Flathead Lake Brewing is such a popular stop in Bigfork. We only got to try a portion of the fifteen or so beers on tap. If time had allowed, a return visit would have been in order to enjoy a few more of the offerings.